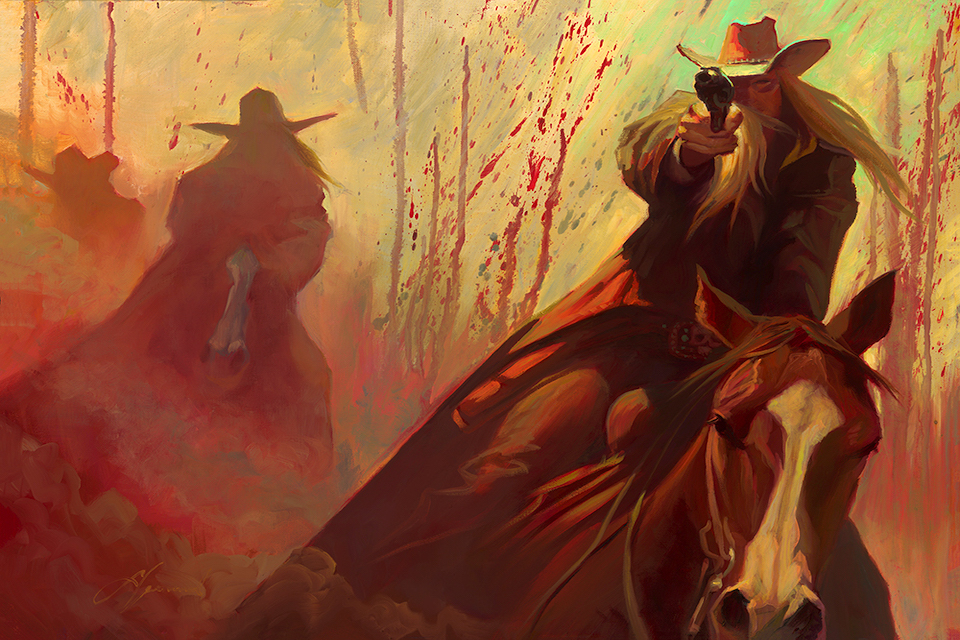 The older he gets, the more Gabe Leonard looks back at the places he’s been. There are the early years growing up in a trailer park at the base of an oil well in Lynch, Wyoming, the now-defunct company town outside of Casper, where he spent a lot of time catching lizards and snakes on the wind-scrabbled plains on what felt like the far edge of the earth. Then there’s the move to Gillette in the sixth grade, where he went from being one of two students in his rural school in Lynch to being the “weird kid from the prairie” in a booming class of 30. Back then, just as now, he relied on his art to navigate the otherwise rocky terrain and establish his identity.

“I was always known as the kid who could draw, and that’s what I did,” he said Tuesday from his art studio in Los Angeles. “It didn’t matter if I dressed like a weird prairie kid or had zero social skills.”

People – including his parents and teachers – appreciated his art and talent and spurred him along, Leonard said. He credits his early years in Gillette and Wyoming for helping him develop his talent and unique style as the influences from his formative years continue to find form on canvass.

Now known by many as the Quentin Tarantino of the art world, his realistic illustrations of cowgirls toting six shooters, famous singers belting tunes on stage or suavely dressed gamblers winning or losing millions at crap and card tables, Leonard’s work stands out for its realism and unique stylings that tell a story. The narrative connotations and emotion in his work have earned him fame as a world-renowned cinematic artist. From college students, serious collectors to Hollywood A-listers, Leonard has gone from hawking 8 x 11” Kinko color copies of fairies and floating trees from a blanket on the Venice Beach boardwalk to owning and operating a private studio with work hanging in galleries around the country and world.

Despite his fame, the 44-year-old still remains the clear-eyed kid from northeastern Wyoming who hasn’t forgotten his roots. In fact, if anything, he reveres his hometown and boyhood memories, where he’ll be returning this weekend for a show at his former schoolmate Allison Kalpin’s Wyoming Art and Frame.

“I love coming back to Gillette,” he said over the phone. Leonard has lived in L.A. since finishing his degree from Columbus College of Art and Design in Ohio. Still, he considers Gillette home, despite his parents having since moved away.

He’s modest when it comes to compliments about his work, which to him, is just what he does and always has done. There was never a moment when he thought he wouldn’t be drawing or painting or making a living as an artist. Initially, he’d moved to the City of Angels with the dream of painting landscapes for Hollywood movie sets, a dream that was squashed within his first week on the West Coast.

“I had been looking for jobs and apartments and got discouraged, so I went to see a movie in a mall in Burbank,” he said. As he watched “Antz,”one of the first fully animated movies he’d ever seen, he realized he was watching his dream go straight down the toilet. “Everything was becoming digital, and I didn’t have those skills.”

Instead, his parents helped he and his roommate sign a lease on a two-bedroom apartment and he took a part-time, seasonal job at Macy’s folding shirts. In his spare time, he continued hitting up studios and graphic design firms, spending all of his money beefing up a portfolio in an overly competitive market where he couldn’t shoe-horn his way in. 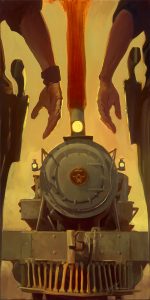 As he explored his new town, he watched artists at Venice Beach selling art work that he felt wasn’t as good as his own. This prompted him to give it a try, which he did successfully for a couple years, enabling him to quit his part-time job and sell his art until the beach became more crowded, and he found himself being shouldered out by other artists and the homeless.

This experience taught him one of the most valuable lessons of his career: get out before you’re pushed out.

So, he began selling his work from a tent at festivals around the state and country, which was lucrative to a point, except all the traveling was cutting into his creative time and he decided to deviate from his plan yet again. Around this same time, he was hit by another epiphany, he said. This time, it came in the form of a Lamborghini.

As he stood on a street corner in Huntington Beach, where he was selling art from a tent, he looked on as a well-dressed man sat in a Lamborghini idling at a stop light with engine purring. He wondered how much money it would cost to own one, mentally doing the math and landing on a figure that far exceeded his current earnings by about 150%.

“I realized guys selling shit out of tents don’t drive Lamborghinis,” he laughed.

So, he regrouped. Again, he rethought his strategy and decided to pour all his money and resources into one of the most prestigious art fairs in the world taking place in New York City. It was another expensive learning lesson, where he figured out that a guy with a mishmash style and body of work with less-than professional presentation isn’t appealing to gallery directors. So, dead broke, he returned home (leaving half of his work until he could afford to have it sent) and focused on honing his own style, which he realized couldn’t be forced just because you decide you need one. It had to emerge on its own and would take him a good seven years from that point to innately develop his own style. One that he enjoyed and didn’t bore him. 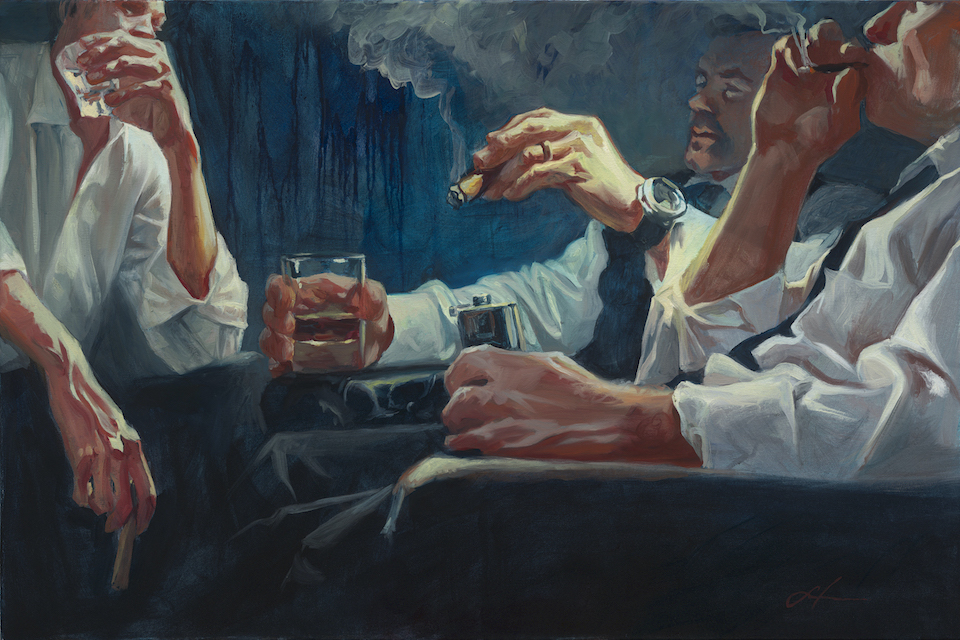 Without conscientiously realized what he was doing, he mentally returned to his childhood memories of cowboys, wind-swept, dusty prairies and the rough-and-tumble figures of the Old West, who lived on the edges, and like him, were tenatiously following their dreams while stumbling over bumps in the road, or sometimes, their own two feet. Memories of his larger-than-life six-foot-four grandfather and his immense hands, the endless horizon and wide, blue skies and the grit and persistence of those first settlers and cowboys began to emerge in his art. It worked. And soon people began to take notice, and from there, his style continued to take root as he caught of the eye of gallery managers, movie studios and other commercial design outlets.

In that regard, his life seems to have come full circle with lots of lean years, painful moments of self-discovery and, most of all, a cultivated and maintained faith in his ability to make a living as an artist. That’s what it all boils down to, he said, and if there’s one bit of advice he’d give to anyone else in his shoes is not to give up or give yourself any other options.

“Had that job at Macy’s folding shirts paid health insurance or given me full-time hours, who knows where I’d be today,” he said. “To make a living as an artist, you have to believe that’s all you have. Do what you’re good at, and don’t panic. It’s going to be difficult, but don’t quit.”

Leonard’s live reception at Wyoming Art and Frame is Friday evening, March 6, at 6 p.m., with a book signing on Saturday from 1 -4 p.m., in honor of the gallery’s fifth anniversary. Leonard’s prints also be on sale at the gallery at 304 S. Gillette Ave.

Kalpin is eager to welcome her friend home to help celebrate.

“This year’s show with Gabe is monumental as small business owners,” she said. “Not only are we celebrating the five-year mark, but we are also celebrating being trusted with a 45-year-old legacy. We are honored to carry that torch alongside the friends, artists and community that continue to keep us busy.”

One audience member on Friday will be chosen to model for a live portrait by Leonard. To enter the drawing, RSVP and receive a raffle ticket at the door. Dress up in a costume and gain five more tickets. For each $100 spent on Leonard’s artwork, customers gain another ticket.

More of Leonard’s work can be found at gabeleonard.com.