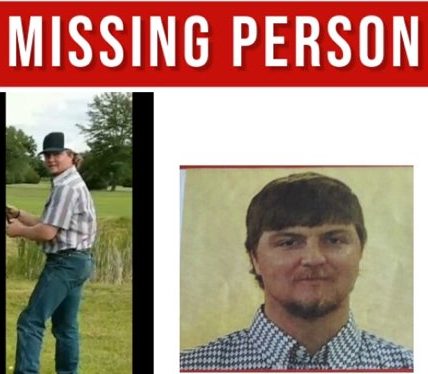 After an extensive search this weekend, 25-year-old Chance Englebert remains missing as of Tuesday morning. The Moorcroft man disappeared during a family trip in the area of Gering, Nebraska, just over two weeks ago and hasn’t been spotted since he left home at 705 O. Street to take a walk the evening of July 6.

Over the weekend, somewhere between 30 and 40 family members and friends scoured the Gering-Scottsdale area as well as branching out to neighboring towns Bayard, McGrew, and Mitchell and across state lines into Torrington, Wyoming.

“A lot of the terrain is pretty rough,” said Chance’s wife, 20-year-old Baylee, who also participated in the weekend search involving small groups of people on horseback, foot, and ATVs. “Some of us had been out from sunup to sundown.”

It’s not just a stroll through some rolling hills, she added. Over the past few days, the group traversed canyons and ravines filled with brush and poison oak and through the high grass and weed-covered banks of the North Platte River dividing Gering and Scottsbluff.

“It wasn’t easy,” Baylee said, noting that she had to stop every three hours to come home to feed the couple’s 3-month-old son. “But if I’m not out physically searching, I feel like I haven’t done anything useful, so it’s a double-edge sword.”

The group retraced a lot of terrain that the police and more than a dozen other agencies had already searched in the days following his disappearance.

Despite dozens of reported sightings – from multiple spots along the I-80 corridor to stores in Casper – none of the tips have proved credible or been authenticated by police or family.

The last confirmed sighting of Chance was around 8 p.m. the night of his disappearance when someone reported seeing him walking down Tenth Street in Gering, Baylee confirmed, heading toward Scottsbluff.

Baylee also said that someone reported seeing Chance later that night about two miles down the road in Terrytown, standing under a tree during a rainstorm, but video footage has since ruled out that it was him. The last confirmed sighting of Chance that night was turning up Martha Drive at 7:51 p.m., a couple miles from the house, according to Baylee.

To date, there’s been no activity on his debit card or phone nor has he reached out to contact his wife, friends, or family members, Baylee confirmed.

The Gering Police have received multiple reports of sightings in the past week – mainly in the Black Hills and Mitchell, South Dakota, area – but thus far none of these sightings have been credible, according to  Captain Jason Rogers.

Right now, no other federal agencies are involved, he said, but they are working with other area departments as needed.

With the river levels falling after heavy rains and flooding earlier this month, Baylee and family have been in contact with volunteer search and rescue divers but thus far no waters have been searched.

The North Platte River is not safe to enter at present, according to Rogers, due to the rapid and unsteady conditions of the river.

Meanwhile, Baylee and other family members are finding it hard to sit around and wait. Monday afternoon, she was planning to take more pamphlets to cities east of Gering and will continue to reach out to national media outlets, and even a psychic, to try to spread the word of his disappearance and bring her missing husband home.

“It’s all really tough right now,” she said as her future is currently on hold.

Anyone with information or clues  regarding Chance’s whereabouts is asked to contact the Gering Police Department at (308) 436-5088.