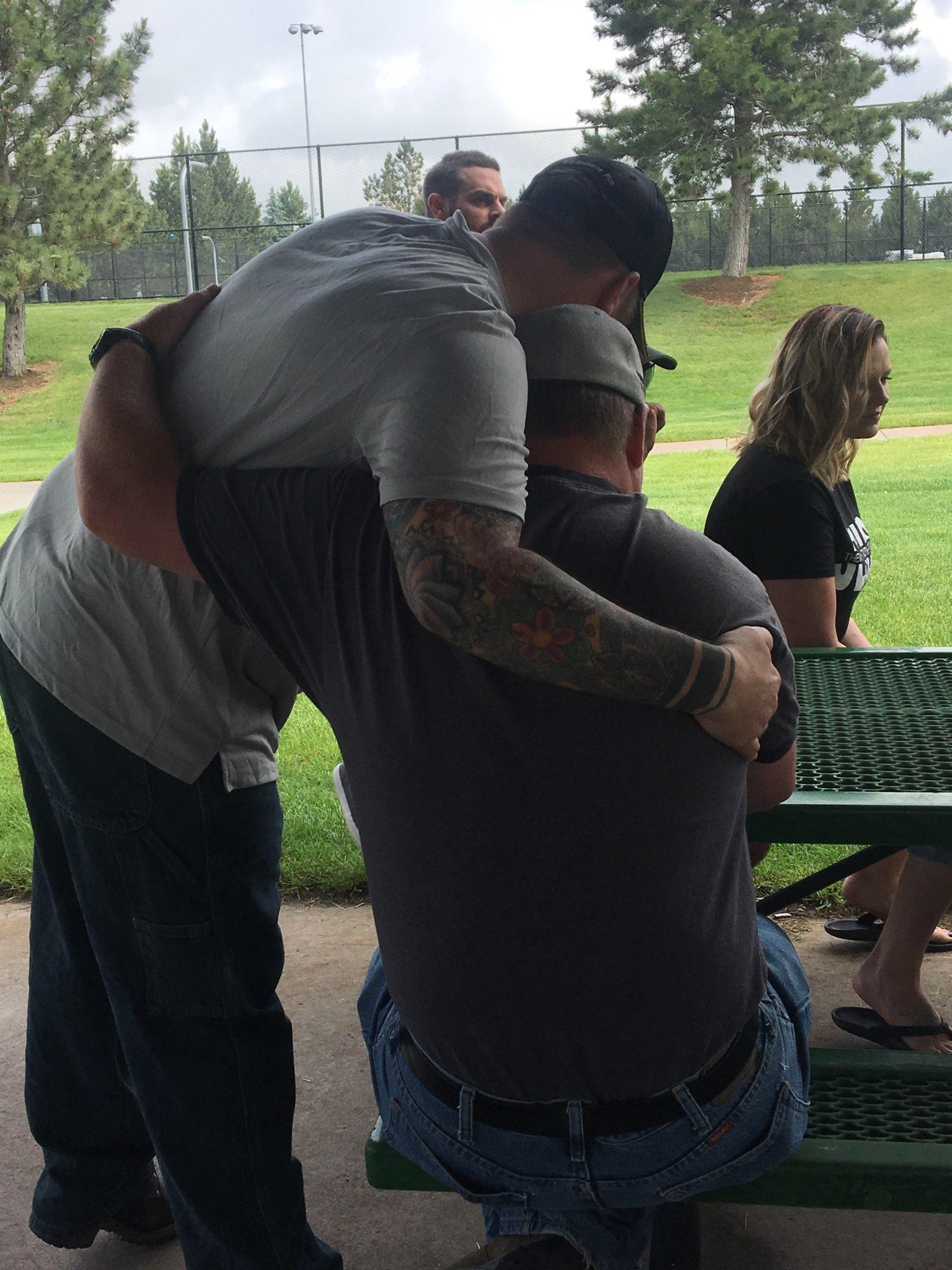 Shawna Langdon spent Sunday afternoon shipping pounds of dog food, toilet paper, and boxes of macaroni and cheese to total strangers she’d never met. After hearing that the checks of the Blackjewel miners back east had bounced, she and her husband Kristopher offered to throw in $700 to help them out.

Both former Belle Ayr miners, the Langdons still feel a kindred spirit with their Blackjewel family, even now, years after they’ve left to pursue other opportunities. On top of that loyalty, they also know what it’s like to go hungry and be worried and stressed about not being able to pay your bills. During the leaner times in the not-so-distant past, there were nights when they skipped meals so their three children could eat.

“We’ve been there,” Shawna said, “and we know all too well what it feels like to be in their shoes.”

After being paid on June 28, the 1,100 employees at Blackjewel mines in Virginia, West Virginia, and Kentucky learned that the checks had bounced, leaving many with overdrawn accounts or on the hook to the grocery stores and other businesses that had cashed them. Some were stranded on weekend vacations with no way to get home, while others were faced not just with overdrawn accounts but also no money to buy groceries, pay utilities or other bills with rent and mortgage payments looming. There’s still been no word on when these funds might be repaid.

Miners in Campbell County were spared this headache after Blackjewel CEO Jeff Hoops personally flew out 600 cashier’s checks in his private jet over the weekend after missing their scheduled Friday payday, claiming $16,000 in personal cost to make the trip.

Dodging this bullet in otherwise tumultuous times prompted many locals, like the Langdons and others, to put together an emergency relief fund to get food and other supplies to those miners in other states who had been impacted.

Initially, the plan had been to load up a trailer with non-perishables and supplies like the group had done for victims of Hurricane Katrina in 2005, using the Langdon’s donation as gas money. But given the distance and the modern convenience of online shopping, they decided instead to donate Amazon and Walmart cards and ask those impacted miners and their families to send them lists of their needs.

Hence, Shawna’s Sunday afternoon shopping spree where she literally maxed out her debit card doubling up orders and sending more staples than the six families on her list had asked for, mainly bottles of water, toilet paper, and diapers. She even insisted on paying one woman’s utility bill after learning her power was about to be shut off.

None of them are asking for much, Shawna noted. Just enough to get by.

“Kristopher and I are in a place where we can afford to do this,” she said. “We’re blessed with good jobs and family, and we want to step up and help out and do our part for these people who are really hurting.

And despite it being her busy season, where recently she’s been logging more than 60 hours per week as supervisor of traffic control for Keyhole Technologies, she nonetheless plans to find the time to see that all of these orders get filled.

“I’ll squeeze it in,” she said with a laugh.

As of last Saturday, the group had already pulled in around $7,000 in Amazon and Walmart gift cards and through GoFundMe pages, helping around 40 families so far with anything from supplies, rent, phone and utility bills, or car payments.

In Pineville, Kentucky, on the eastern edge of the state bordering Tennessee, 42-year-old Robert Elliott was busy wringing his hands. Shock, then bam, is how he described his response in the aftermath of learning he no longer had a job. Next, came a  call from the neighborhood grocery store that had cashed his check, letting him know he could be charged with a felony if he didn’t get those funds returned.

The single dad with two kids under 10 years old was at a loss as what to do next. Unlike Campbell County, community groups and leaders hadn’t come out in droves offering resources and stepping up to fight on their behalf.

He’d been working at Revelation Energy’s Cloverlick mine Monday when his boss asked them to come outside. They were told that the judge in Blackjewel’s bankruptcy hearing earlier that morning had frozen the money. Employees were to leave the premises and come back and get their stuff the following day, when they would hopefully be back to work. Now, it’s a waiting game.

Having worked there for about eight months, Elliott had been thrilled to land the job.

He’d gotten into mining about 15 years ago as an alternative career after years of working as a paramedic, and since then, had been struggling to stay afoot. Other than a $10.50 an hour manufacturing job in a neighboring town, coal was the only viable career option.

“Lord, there’s nothing here,” he said. “If you luck out and get a coal mine, consider yourself lucky. You’re able to pay your bills.”

Sunday, faced with uncertainty and having no idea how he was going to pay his $375 rent the following Friday, the post on the Blackjewel page asking if anyone out there needed help was like a lifeline for Elliott and others.

He wondered why on earth people in Wyoming wanted to help them out.

“They’re hurting just as bad as we are, except for getting their checks,” he said. “I couldn’t believe they were offering to help us out. We don’t do that around here.”

Thus far there had been no such response from his own community.

“People here just don’t help each other out like that anymore,” Elliott said. “They used to, but I don’t know what happened. People here need to take a lesson from you guys.”

Over in Harlan, Kentucky, Rachel Bennett was equally surprised at Campbell County’s generosity. She’d requested soap, shampoo, toilet paper, and a few other everyday necessities. Her husband’s check had been yanked out of their account, and they’re about $2,000 overdrawn and worried about their mortgage payment.

“I’m not sure what we’re going to do,” Bennett said.

A Blackjewel bankruptcy hearing in federal court in West Virginia Saturday made no immediate promise of payment to those workers until the company can resume normal operations as out-of-work employees remain in limbo.

“We know this is not the news you had hoped for, nor is it the result that the management is working towards,” Blackjewel said in a statement to its employees following the hearing. “We assure you that management is doing everything it can to obtain financing to resume normal operations. Once this financing is obtained and operations are resumed, we plan to pay all prepetition amounts due to these employees at that time.”

On Monday, Blackjewel issued an employee update outlining a few key developments, including sending 120 employees temporarily back to the shuttered locations to ensure the safety of the mines and equipment. Employees temporarily returning to work in Kentucky, Virginia, West Virginia have been issued checks while Wyoming miners are being paid through electronic funds transfer.

“As we have said previously,” the statement reads, “management is working as quickly as possible to secure additional financing from new or existing lenders to resume Blackjewel’s usual operations.”

They acknowledged the urgency and the hardship many families are facing and promised to do everything in their power to get their employees back to work.

After days of no communication,Harlan County Judge Executive Dan Mosely held a meeting June 8 for impacted Blackjewel employees at the Harlan County Courthouse. “He didn’t know who they were,” Mosely told them. He didn’t know their names or have their addresses. Now, he does. 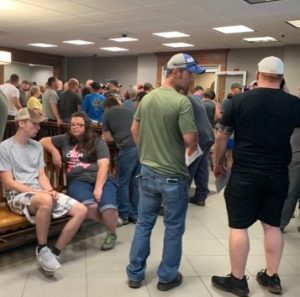 Standing in front a large crowd of people in the humid courthouse where many fanned themselves or stood asking questions, Mosely told them that he had their backs and was fighting for them. Kentucky Governor Matt Bevin announced that same day that the Labor Cabinet is investigating the lost wages for Blackjewel miners.

“You should not have to destroy your credit because someone failed to pay you for the job you did,” Mosely said.

Several booths were also set up for miners where they were able to report their bounced checks to the labor department and to write letters to creditors asking for relief, along with other services. Unemployment officials were on hand to help miners as was the Eastern Kentucky Concentrated Employment Program with information about their Dislocated Worker Services and Training Program. Miners were also able to identify their top two priority needs, so local organizations can help.

Rachel Bennett was there with her husband, a mine employee. Recovering his unpaid wages and filing for unemployment were the major concerns on her mind, as other miners had been sharing stories about not being able to file because they are technically still employed. Others have complained about not being recognized as employees when they went to file their paperwork, while some claimed that Blackjewel is protesting their filing.

All their concerns are being looked into, Judge Mosely said, urging patience.