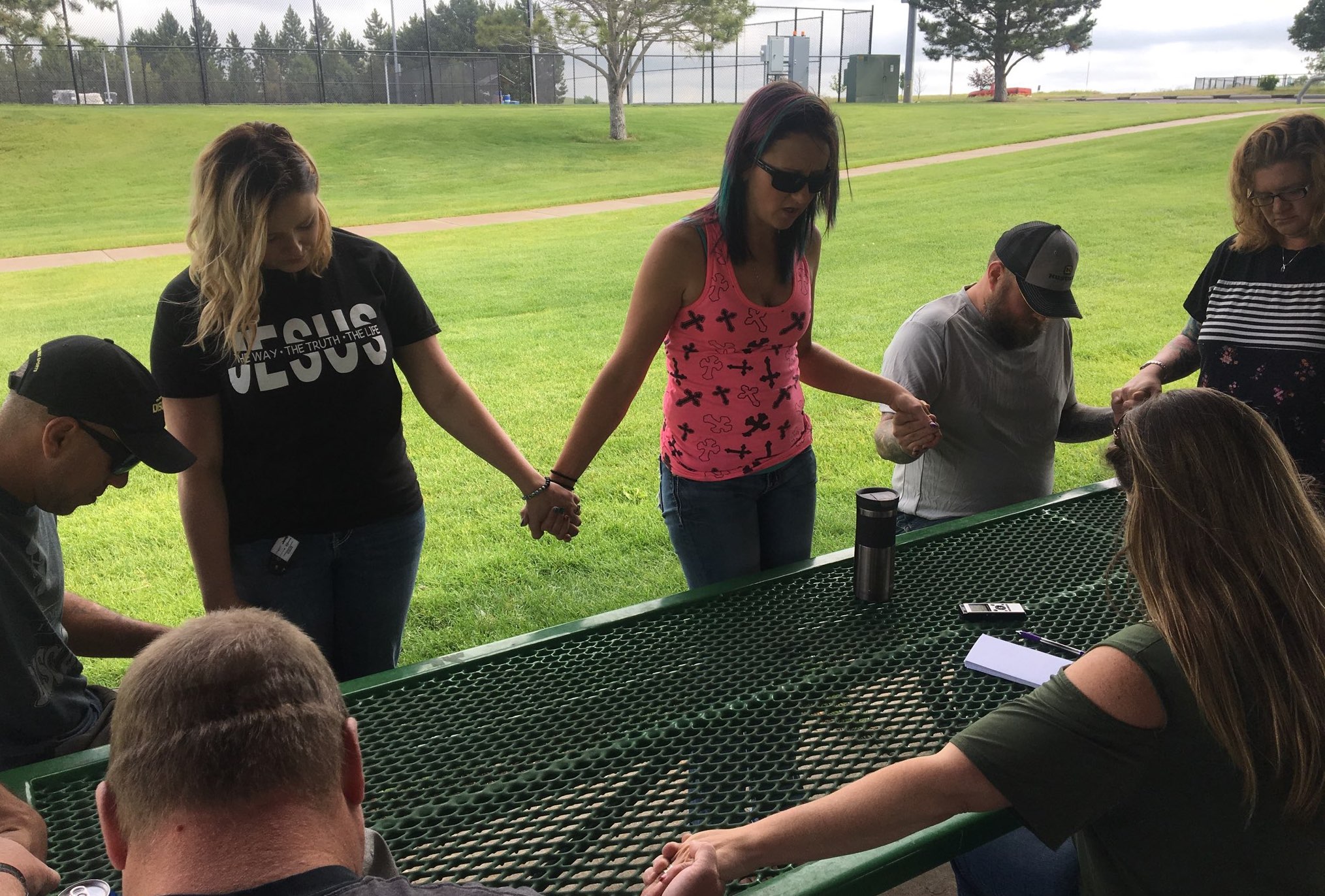 “As hard as it is right now, we need to pray for Jeff Hoops,” Michelle Young said, her head lowered in prayer. “Because if anyone needs it right now, he does.”

The other dozen or so laid-off coal miners murmured in agreement as they held hands at the picnic table in Bicentennial Park Wednesday morning where they’d met to pray and check in on each other. Since Monday afternoon, when they’d all got wind of the layoffs at Blackjewel’s Belle Ayr and Eagle Butte Mines, employees have been pulling together to share information, group meals, and pray. For Hoops, for themselves, for their families, and for the community who has stepped up to show their support, with local businesses offering discounted health care from High Desert Healthcare, free burgers, meals, and more, as state, city and county agencies rush in to offer various resources.

As Young said, they are blessed to have each other, and a support system who has reached out to them with open arms.

Laid-off Belle Ayr shovel operator Dan Zarecky sat off to the side at a neighboring picnic table and watched his daughter playing at the top of  a slide away from the other children. Like him, she’s trying to piece together events of the last couple days.

He had been working Monday when his supervisor called over the radio to tell them to park in a safe location and come inside. They’re closing, he was told.

“Within a matter of minutes, 600 lives were upside down,” he said. “[It was] quiet, sad, and emotional. I was able to hug three friends before I just lost it. The three people I said goodbye to, it was hard, it was really hard. It’s hard to even talk about it now.”

Like the others, it’s not the money as much as the job. He really loved that job. After being laid off as a temp at Peabody, he’d gotten the job at Belle Ayr, where his shift took him under their wing. He had been there for a year, and for the first time in his life, was able to pay his bills and save some money. He was finally on a career path. With a tween daughter and another baby due in October, he can’t afford to wait it out and is already submitting resumes. Who knows? He shrugged. Maybe there will be a last-minute miracle, and they’ll all get to stay.

Former Belle Ayr heavy equipment operator 40-year-old Rory Wallett, who along with Tandie Lingle have put together a Facebook page for the group, organized this morning’s event. A natural leader, Wallett has stepped up to not just facilitate the page but also to field texts and calls from Blackjewel executive Joff Pilon, who has been sending constant updates and information since Monday, along with words of hope and encouragement.

Wallett, who greeted and hugged the dozen or so people gathered in the picnic shelter with a big smile or slap on the back, remains optimistic and refuses to get involved in bashing Blackjewel CEO Jeff Hoops or engaging in any of the rumors. Instead, he thinks that no matter what happens, the layoffs have brought the group he considers family even closer together. Yesterday, many of the miners met for free burgers at The Railyard, and he’s humbled by the outpouring of support and generosity.

“It’s been a blessing to have all this support,” he said. “I have hope and faith that it will all pull together, and we’ll be able to keep our jobs.”

The last couple days have just been a big shock, he said. He just didn’t see it coming.

The missing paychecks on Friday weren’t a huge surprise to Wallett or former co-worker Kelly, who chose to give just his first name. The last eight or nine paychecks had been showing up later and later in their accounts on designated paydays, and when they were told last Friday that it was an administrative error, they didn’t give it much thought. Cashier’s checks were flown out from West Virginia the following morning, and both of theirs have since been cashed and the money is in their accounts.

When they read the news about the bankruptcy Monday morning, the irregularity in their paychecks finally made sense. That still didn’t cause much concern until they’d read on Facebook about employees getting sent home that afternoon. That’s one nobody saw coming. Both were scheduled to be on shift that night and called their supervisors to confirm. Yep. The mines were shut down until further notice.

Kelly, who has worked at Belle Ayr for the past five years, was at a loss Monday night when 5 p.m. rolled around, and it was time to kiss his wife and head to work. He had nowhere to go.

“It’s weird to think of all our equipment sitting idle and all of us at home,” he said, shaking his head.

Reality came next: bills, the car payments, credit cards, and the mortgage of his big beautiful house on top of the hill with a picture-perfect view of the Bighorns. Like a lot of families, he lives pretty much one paycheck to the next, with just a couple months of buffer savings.

“I just thought, how am I going to pay for all of this now?” Kelly said.

He’s luckier than others, he conceded. His wife has a good job, and he’s on her insurance plan. Still, he doesn’t want to think about selling his house or leaving Gillette, a place he’s come to consider his home since moving his family out here from the Midwest decades ago.

More than the financial worries, however, he’s just sad. He really loved that job. At 54, he’s held other jobs, but none suited him as well as working in a coal mine. He’d worked at Buckskin Mine and been laid off prior to being hired at Belle Ayr, but this one had come out of nowhere. More than the shock of losing his job, he’s more upset about losing his co-workers.

“We’re all like a big family,” he said, echoing the sentiment of many there that morning.

Wallett gave him a shoulder hug. “We’ll get through it,” he said with a smile.

Wallett, like some of the others gathered at the park that morning, have mining in their blood. Going back three generations, Wallett’s family has worked in Gillette coal mines.  Wallett, too, has been through layoffs and slowdowns and has seen Belle Ayr exchange hands many times before. He ticked off a long list of former owners before Blackjewel. The difference was they’d had notice and weren’t surprised to see layoffs or changes come. Despite the unknowns, Wallett remains optimistic that if CEO Jeff Hoops can’t dig himself out of this hole, somebody else is likely to swoop in and buy it.

“Belle Ayr and Eagle Butte are two of the most productive mines in the PBR,” he said. For the past several quarters, they have been turning a profit, he added, and as of now, still have about 18 million tons of coal sitting there ready to go. Both he and Kelly had been under the impression that the mine was doing well. They’d met their goal to export coal to Spain, and despite some recent upheaval in the market, believed things were on the upswing.

They both have nothing but good things to say about Blackjewel management and human resources, who they feel have been working hard to get to the bottom of things and keep employees informed. He’s not sure about health insurance, but when he went to The Coalition Tuesday to get his regular blood work done, his insurance card was taken. And unlike some others who see coal mining as increasingly perilous industry and are thinking about jumping ship, Wallett plans to stay put.

“Coal gets a bad rap in general,” Wallett said, and even some of his family is worried about the state of coal in the face of low natural gas prices and clean energy policy driving the market from Washington. If the state continues to put money behind the innovation of clean coal and carbon sequestration, the area is likely to see a revival, he believes. And despite some of the pessimism, he’s been around it long enough to know that coal is not dead, nor is it likely to go anywhere, anytime soon. 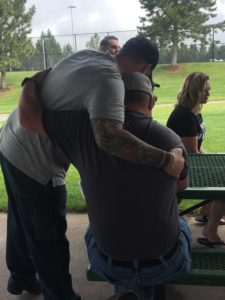 Despite his cheery optimism, he and Kelly are taken aback when their phones chimed and they checked their messages to read the breaking news that the judge in the West Virginia court has denied Blackjewel’s last-ditch effort for a financing plan. Kelly stopped reading and put his phone in his pocket while Wallett sighed.

As if on cue, his phone chimed with a text from Pilon, reiterating that message. “Hang in there people, we’re working on it.”

A second chime moments later a second text from Pilon arrived. “Nothing other than I am sorry it takes this for me to say how much I appreciate Eagle Butte and Belle Ayr employees!!” he wrote. “Still some hope!”