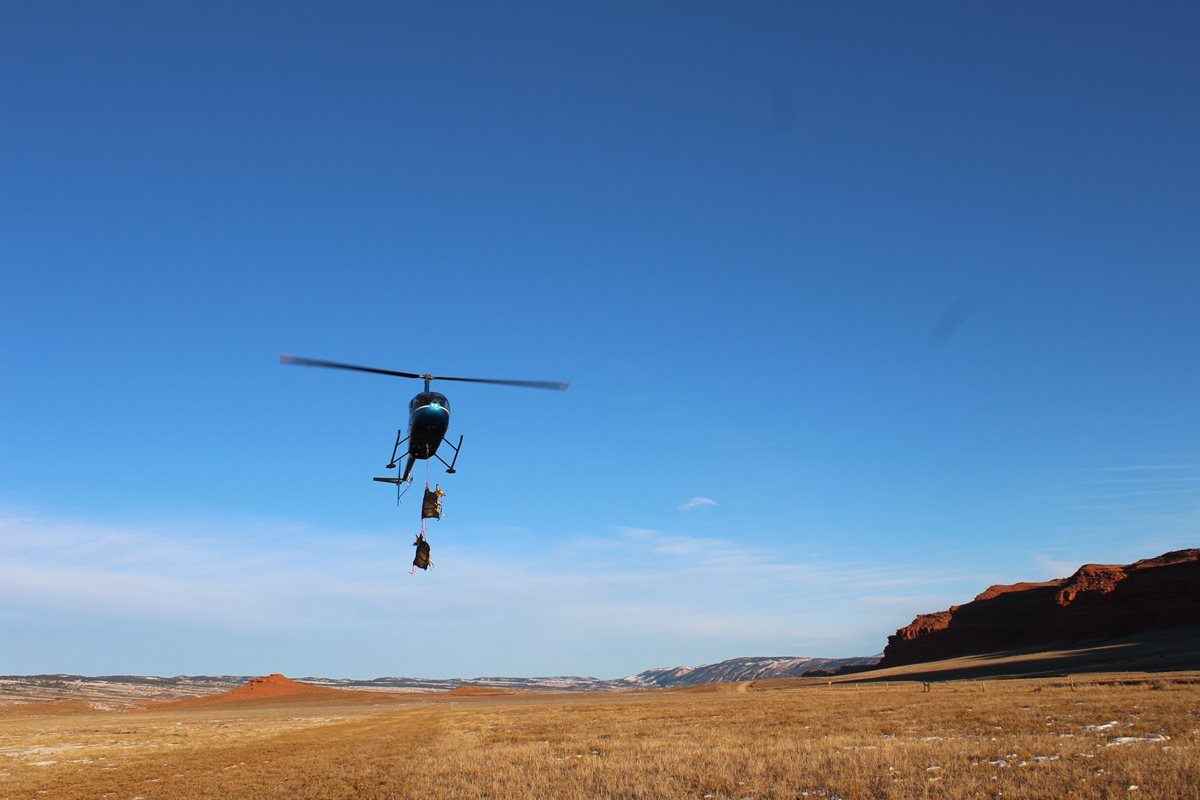 (Photo courtesy of the Wyoming Game and Fish Department)

The first large-scale movement study of mule deer in the Sheridan Region kicked off last month near Kaycee, Wyoming, where dozens of does were captured, airlifted, and collared.

The efforts were part of the Mule Deer Initiative, a statewide program originally created to address a severe decline in mule deer population across the state.

For this project, the Wyoming Game and Fish Department selected the Upper Powder River herd—which ranges across Hunt Areas 30, 32, 33, 163, and 169—one of the problem herds where the population consistently remains below the population objective of 18,000 deer.

Seeking to evaluate the overall condition of the herd and to identify any factors affects the mortality rates among the herd, wildlife managers instituted a three-year monitoring project, which started last December.

The capture operation began on Dec. 13 and ended on Dec. 14 at several locations around Kaycee and Buffalo.

Deer were captured via net gun fired from a helicopter. Once they were secured and blindfolded, the deer were given a mild sedative before being airlifted, one or two at a time, to staging locations for collar fitting.

The WGFD reports that 70 does were captured and fitted with GPS neck collars that will relay movement data for the next three years.

The collars collect and store their host’s GPS location every two hours and can be tracked by researchers using receivers.

Buffalo Wildlife Biologist Cheyenne Stewart added that the collars can transmit real-time GPS locations of the collars, which is collected every six hours and transmitted via satellite every 36 hours.

“I can view those locations on my computer. During the project we’ll get broad-scale movement data,” Stewart said. “But at the end of the study we will get the two-hour locations.”

The data will provide researchers with more precise movement and habitat use patterns and may even identify fawning locations.

All data gathered won’t be analyzed until the collars are recovered, which won’t happen until the deer either dies or the study comes to an end.

Researchers also collected a number of tissue, bodily fluid, and fecal samples to test for parasites and CWD.

“This was unexpected given reasonable precipitation this year,” Thiele continued in a statement. “The study may help identify limitations in habitat which lead to poor body condition that can affect winter survival, fawn production, and birth weights.”

The deer will be recaptured annually during the same time of year while the study continues.

Stewart says the recapture efforts will be to repeat body condition measurements and the ultrasound.

“That way, we can learn how deer movement, habitat selection, and weather influence body condition of deer coming off the summer range,” Stewart concluded.

The project is funded through the Mule Deer Initiative via the Wyoming Game and Fish Commission, the Bureau of Land Management, and the Campbell County-based Wyoming Sportsman’s Group.

Throughout the duration of the project, periodic updates will be provided with a more detailed report on the way, to be featured at the annual Buffalo and Kaycee season setting meeting this spring.