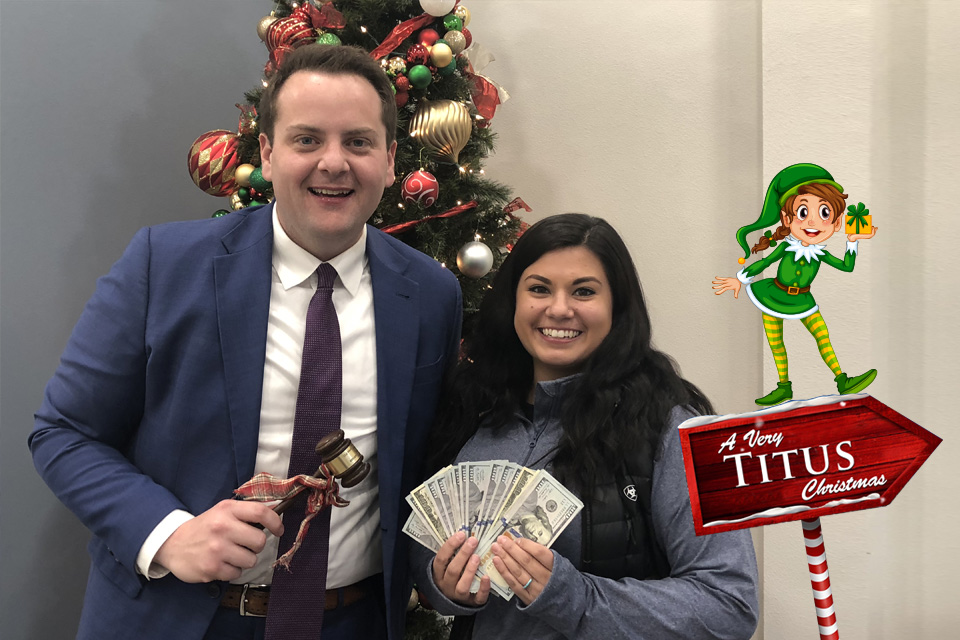 The A Very Titus Christmas giveaway gavel, worth $2,500 cash, has been found and returned to Steven Titus & Associates, P.C.

It was located at McNanneman Park under a lone, living blue spruce tree, and found by Andrea McClure, a life-long Gillette resident and manager of her family’s business – The Ice Cream Café.

Andrea found the gavel in the first three days of the contest, which began Saturday, and after just two clues had been given.

She said she read the contest rules last week, so she knew it’d be in a public place.  Clue one, “Where animal feet have etched themselves, you will begin the search,” was an easy one for her, she told County 17, because she often walks her dogs at the park and has seen the tracks there before.

She went on to say that she loves riddles and simply put two and two together from there.  “Since all the trees at McNanneman Park are dead except for that one blue spruce, it was actually pretty easy.”

Andrea, who said she hid the gavel in her pocket on the way from the tree to her car, and from her car into the office of Steven Titus & Associates, P.C., isn’t sure what she’ll do with the money – yet.  She’s “just so excited.”

For returning the gavel, she’s won $2,500 cash in time for Christmas from Steven Titus & Associates, P.C.

The gavel, which was returned to Steven Titus personally, will remain in his offices until this time next year, when he shares, “We’ll be hiding it in a far more challenging location, that’s for sure!”