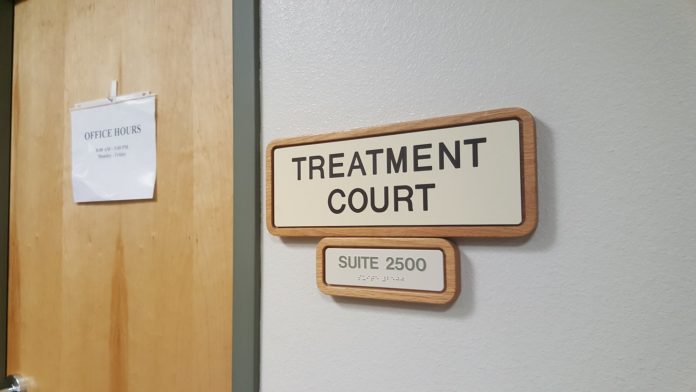 Personal Frontiers announced last month it would be ending its contract with Adult Treatment Courts. The move highlights ongoing struggles treatment providers face as they try to address addiction problems in the community with few resources and high demands.

Sherry Bertoncelj, executive director of Personal Frontiers, said the decision was made because the demands of the contract were straining the non-profit’s ability to provide a high level of care.

Over the past few months, she was becoming more and more concerned that Personal Frontiers would start compromising the quality of its care. It was something she wants to avoid, even if it meant severing the contract.

“You put too many people into group therapy, and it’s not therapy anymore,” Bertoncelj explained.

She said the treatment court system works and is vital to addressing an underserved problem in the community. She said Personal Frontiers would be open to future collaborations between with Adult Treatment Court.

The separation will allow Personal Frontiers to “step back and regroup,” Bertoncelj said.

The treatment court has already found another service provider, and the commission will consider a new contract with Campbell County Health Behavioral Health Services tomorrow at its regular meeting.

Denise Elbert, treatment courts program coordinator, said the only disruption was to group therapy, which was paused for two weeks. In that time, the treatment court held an in-house program that allowed the participants to maintain their court-ordered treatment schedule.

“They were able to stay on their schedule as if they were going to group,” Elbert said.

Group therapy sessions will now resume with Campbell County Health. The court program requires nine hours a week of group therapy for between 12 and 16 weeks.

“We have everybody set to go,” Elbert said.

Another change that will hit the program is Elbert’s resignation. The coordinator said it was a personal decision unrelated to any contractual disruptions.

“It was a tough decision for me personally. It’ll be good for me in progressing in my career,” she said.

Campbell County Human Resources Director Charlotte Terry said she doesn’t expect filling the position will be especially difficult. The department has had a lot of luck filling similar open positions in the past.

The county has posted the position and is entertaining resumes.

“We hope there are some internal candidates. We never know until it’s closed,” Terry said.

She said the state of Wyoming has stringent requirements that make it very difficult for counselors to qualify. She’s had people with doctorates in psychology interested in filling positions at Personal Frontiers, but they can’t get their license to treat addicts in Wyoming.

In order to meet the state requirements, a counselor has to have a certain number of hours of practicum, which is a bit like a doctor’s residency requirements. It’s on-the-job training.

Typically, psychology students get their practicum experience as part of the doctoral program. Many counselors will have their master’s degree, which would qualify them for drug treatment counseling licensing requirements in other states.

In Wyoming, however, that’s not enough. And there’s no way for them to satisfy that requirement without fully entering a doctoral program.

Bertoncelj said she doesn’t want the state to lower its requirements, but it would be better if the practicum could be satisfied through other avenues, such a program at a college.

“We have to work hard at self-care.” – Sherry Bertoncelj on the demands faced by drug treatment counselors.

“I think we can be more welcoming of bringing in professionals,” she said.

She said in many other ways, such as pay, Campbell County is very competitive. But in such a specialized field with few professionals working within it, these extra barriers are not helpful.

The job itself is also very demanding, she said. She has counselors working until 9 p.m. three and four nights a week. Add to that the other difficult aspects of the job, and a counselor can burn out quickly.

“We have to work hard at self-care,” she said.

And the demand for treatment services is quite high. Despite our relatively wealthy community, Bertoncelj said, addiction knows no socioeconomic barriers. Rich and poor alike struggle with addiction and alcoholism.

And it’s not an easy illness to treat, Bertoncelj said. There’s a lot of things the area needs to really address the issue, including a detox center and an in-patient facility. These are available elsewhere, such as the detox center in Sheridan, but sending someone out of town just presents another barrier to them getting help.

When an addict recognizes a need for help and seeks it, the fewer barriers there are, the more likely treatment will be effective.

“You’re going to lose them if help isn’t there,” Bertoncelj warns.

While such services cost a lot of money, Bertoncelj points out the community ends up paying a lot more for untreated addictions from costs associated with domestic abuse, incarceration, unemployment, and neglected children. She estimates Personal Frontiers has saved the state and county about $400,000 to $600,000 in avoided costs from untreated addiction.

And there’s really no way to cut costs. Whereas volunteers can provide a lot of help to those in need, drug treatment requires specialized training at a very high level. And an effective program can take months to complete successfully.

“This is no short-term solution” to treating addiction, Bertoncelj said.

For now, Personal Frontiers is going to concentrate on providing a high degree of care for its clients to whatever degree it can without compromising quality. The non-profit works with a lot of other non-profits, such as the Gillette Abuse Refuge Foundation and Y.E.S. House.

Addiction comes with a host of co-occurring disorders, making a continuum of services necessary. It’s not really about treating one person.

“You got to treat the family,” she said.