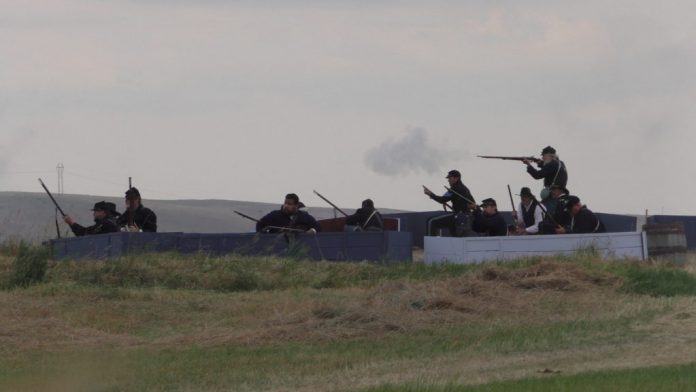 This story was originally written by TJ Parks and was published on Aug. 3, 2018

Captain James Powell, commander of the C company of the 26th US infantry regiment, left Fort Phil Kearney with his company to protect a group of woodcutters who were cutting timber for the fort. The land was deep in Sioux territory, and the tribe’s forces had been extremely active in the area. Furthermore, a major victory over US soldiers at the Fetterman fight about seven months earlier had boosted Sioux morale, making the group even more combative.

Chief Red Cloud, who led the Sioux’s efforts, begun the attack by sweeping onto the woodcutters’ camp and the herd of mules the woodcutters were using for transportation. Powell countered by attacking the Sioux flank, stealing Red Cloud’s attention and giving most of the woodcutters time to retreat to the fort.

Powell and his soldiers had barricaded themselves with the wagons the woodcutters were using to transport wood.

The soldiers took off the boxes and punched holes in them to fire through. They also spread blankets over the boxes to conceal their positions.

The soldiers were armed with Springfield rifles, which could fire around 15 rounds per minute. Although they began the fight with 7,000 rounds, the ammunition had nearly been depleted seven hours later when the fight was finished. The Sioux had never seen the soldiers from Fort Phil Kearney use these rifles before, and they were amazed by how quickly they could reload. Wave upon wave of Sioux warriors flooded toward the makeshift corral, but none of the Sioux ever broke the barrier.

Sometime in the afternoon, as the US soldiers were running low on ammunition and growing weary from the fight, Powell and his company turned to see a howitzer firing toward the Sioux and an accompanying force of 100 soldiers guiding the gun along. The shell didn’t reach Red Cloud’s forces, but the warriors were startled by it and retreated.

The rescue party, led by Major Benjamin Smith, expected to find Powell’s entire force dead inside the corral, but instead found the company had very few losses. That’s not to say that the rescue party wasn’t needed, however. Smith wrote that, when he found the soldiers, “the smoke from their guns had colored their faces and they looked as though they had used burnt cork on their faces.”

The battle was the last major fight in Red Cloud’s War.

99 Dead in Kemmerer Mine Explosion: #ThisWeekInWYHistory