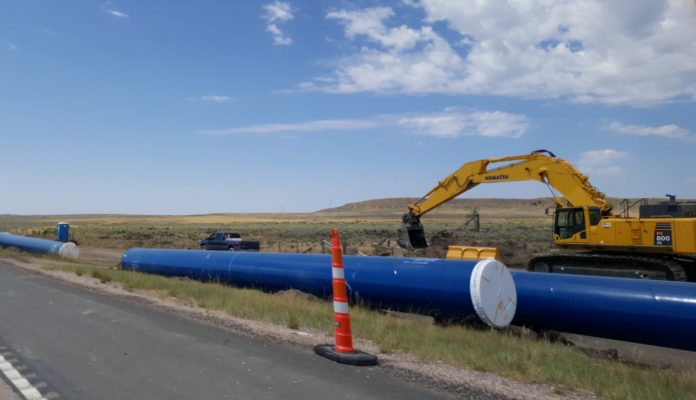 (Gillette, Wyo.) The City of Gillette held a public meeting last night on the Madison Water Supply Project. Residents in Crook County who blame the city for their well problems came to hear a presentation on the history of the project and pose questions to the city.

The controversy stems from private wells in the Carlile area running dry and becoming acidic after the city began discharging water from its newest wells.

Lab tests conducted by the Wyoming Department of Environmental Quality ruled out acid stimulation as the cause of the problems, but one possible cause is the city’s discharge activities, which could result in reactions with pyrites and production of acid in the private wells.

While no test has or may ever prove or disprove the city’s activities at the well field is the source of the problems, the chronological relationship between the when residents began to have problems and the city’s activities has many Crook County residents pointing their fingers and demanding the city provide access to the regional water system for the Crook County residents.

The city has maintained it cannot provide taps to the system for residents outside of Campbell County without costly legal consequences.

Sen. Ogden Driskill (R-Devils Tower), who spoke during the question period of the meeting, said he wasn’t looking for arguments with the city. He only wants solutions. And he said he would be undeterred in getting access for the residents of Crook County.

“I’ll do everything in my power. I’ll do what I can to get my water back into the districts,” the senator said.

Mike Cole, utilities director for the city of Gillette, ran through the 12-year history of the project. It was funded with a combination of state and local funding, including a specific-purpose excise tax, sometimes called a cap tax, passed by Campbell County voters in 2011.

The history of how the project was funded relates to why the city argues it cannot provide the Carlile residents taps to the system. According to the city, since Crook County did not pay a cap tax to pay into the system, then providing them access to it effectively goes against the wording of the law Campbell County voters approved.

“The city of Gillette has upheld the will of the voters,” said City Administrator Pat Davidson.

In response to the city refusing to provide the access to the system Crook County residents were asking for, Driskill attached an amendment to the Omnibus Water Bill passed in the last legislative session.

The amendment required the city to provide 200 taps at a maximum of 1 million gallons each, if the city agreed to accept a grant that would have provided funding for design and construction of phases that would bring water to subdivisions near Gillette.

Driskill’s amendment is not law, Davidson explained. It’s a conditional provision for the city to receive the funding for the next phase of the system. Considering the consequences, the city decided to pass on the funding, effectively nullifying the amendment.

But by doing so, several subdivisions that were expecting to tap into the system are not going to receive water. In fact, the entire project has yet to deliver water to hardly anyone due to the controversy.

“It holds up and may hold up indefinitely potable water” for these subdivisions, Davidson warned.

At last night’s meeting, Cole explained adhering to those provisions of the amendment would be beyond what the system was designed to provide.

Drikill’s amendment also provides water to 200 taps for agricultural uses, which the city argues falls outside the intention of the funding the state provided for the project.

By providing water for this use outside the original intention of the project, it would potentially put the city on the hook for over $100 million in funds it would have to pay back to the state.

While the city has presented its case on the matter previously, Davidson said a lot of misinformation is spreading.

“There’s been a lot of comments in the press and social media,” he said.

After presenting its case, residents whose wells have developed problems were not satisfied with the city’s explanation.

In the course of the presentation, Davidson said the city and state have spent over $1 million addressing the controversy.

Janet Kanode, who lives in the area of the well problems, asked why the city hadn’t just drilled new wells for the residents, which, at $40,000 each, would have been cheaper.

Davidson said there would be legal barriers for the city of Gillette to appropriate money to drill wells for residents of Crook County in order to address problems that the city has not been proven to have caused.

Dick Claar, who was mayor of Moorcroft in 2004 and currently serves on the town’s council, said Moorcroft was given the option to tie into the system, but the city wanted a prohibitive fee for the water.

“The price was so prohibitive that the people in Gillette were playing less than the people in Moorcroft. I thought this was a regional project,” Claar said.

He went on to say he doesn’t believe Moorcroft or Crook County has been given a “fair shake” on the whole issue.

Bill Fortner, who regularly speaks at public meetings, asked the city if they were going to seek state funding to address the issue.

Davidson said that the legislature might get involved but there was no way for him to predict what outcomes concerning this issue might come out of future legislative sessions.

As the two parties continue to debate the issues and the project likely remains at a standstill until it’s resolved.

As such, there was a lot of discussion of state involvement at the meeting. Davidson said nothing much can be done until the state either removes Driskill’s amendment or passes an appropriation in the next session that doesn’t carry any provisions the city can’t agree to.

“That’s the first step to the process. Until then, the city of Gillette doesn’t have the ability or the capacity to meet the demands of that amendment,” Davidson said.