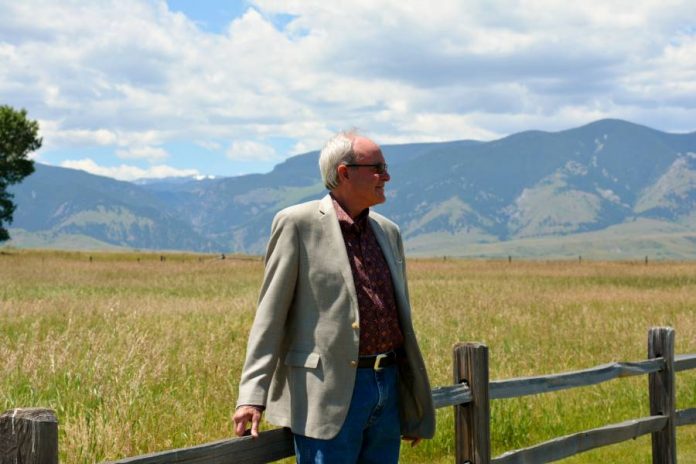 (Gillette, Wyo.) Bill Dahlin is a Republican candidate for governor. He is a Sheridan native, and his campaign platform stands upon creating jobs, diversity in business, and economic development and growth.

After graduating college, Dahlin began working for Burlington Northern Railroad, working his way up from laborer to upper management. He passed on an offer in 1991 to work at a corporate position in order start his own company from scratch. He’s since started a number of other ventures throughout Wyoming and North Dakota.

County 17 sat down with Dahlin to discuss his campaign and his vision for Wyoming.

This interview was edited for style and length. Please see the video for the full interview, which includes a discussion of the potential for industrial hemp in Wyoming.

C17: What do you think distinguishes you from other candidates in the governor’s race?

I am the only candidate that sells coal. My background is coal, transportation, and logistics. I created businesses from scratch. One coal mine I purchased was already out of business when I turned it into a multi-level, diversified successful business.

None of the other candidates have that. In fact, Sam Galeotos works for Greenhouse Data, and they are opposed to coal. Renewable energy is their target. That’s a big difference. There’s a few other candidates that have belonged to the Sierra Club. That’s not in my background.

I’m looking forward to working with the people of Wyoming to diversify the economy, because I know the coal, transportation, and logistics sectors. And I know the ups and downs of that business.

C17: You don’t have any background in public office, but from what you’ve said you consider that an asset.

It gets me when politicians have been in office a long time and they say they have new ideas to bring to the table, when in reality they’re just bringing their polished political viewpoints into the realm. I don’t have any of those to bring. I’m just going to think differently.

C17: School funding became a hot topic in the past legislature. And there were some reductions in future spending, what some call cuts to funding. Do you think the outcome was favorable for Wyoming? As governor, how would you approach the issue of school funding?

I think our legislators are doing the best they possibly can with what they have to work with. And there it gets down to the economy and funding, but that’s nothing new. Our education system has been challenged ever since we’ve been a state.

But we evolved. Our school systems get better. Everything is not the same as it was 10, 20 years ago. I see us all working together to come up with solutions for education, with the legislators and myself.

Really, the teacher is the most important first-line person that works with our most valuable resource, which is our students. We want the best possible education we can get for that student. We want to let that teacher do his job and teach. And that’s what we should focus on.

C17: Wyoming is seeing a much-improved economy over where it was at a few years ago. The state is likely to see some improved revenues. In light of this fact, would you, as governor, seek to keep the budget where it is, increase spending, or do you think further cuts are needed?

I think there are cuts that can be made, and I think fiscal responsibility is very important. I’ll give you a couple examples. Coal is relatively flat. We’ve gone from 600 million tons of coal per year, down to now about 300 million tons. It may get up to 400 million tons, but I doubt we’ll see 600 million tons again. It’s going to stay pretty steady, depending on natural gas, for the next 20 years. And that’s not a bad thing.

We had a year ago 25 oil and gas rigs. Today we have 26. So, there’s not a big change as far as oil and gas go. And they’re always volatile.

It’s prudent for us, until we get diversification going, which we’ve never had, I think at the top—I’ll give you an example of a couple areas. We have 175 slots for highway patrolmen to protect the safety of people in Wyoming. They can only fill 125 of them, because they’re not paid properly and they’re not treated properly, in my opinion. So, we have that as a definite need we have to look at as far as our government goes.

And then on the other side of the coin, the governor has a jet airplane. The state has a jet airplane, as an example, to the tune of about $3 million a year in operating costs. Needless to say about the asset liquidation that I would have when I sell them. And that’s just a convenience. That’s just a small token at the top level where things are askew.

We’ve had the Wyoming Business Council for 20 years now pushing hundreds of millions of dollars in expenses that was set up 20 years ago to diversify the economy, which was their charge. Now 20 years later, we’re still the same. We’re still dependent on the energy sector after spending all that money.

Now we add ENDOW on top of that. And when we add ENDOW on top of that, it’s another $40 million in expenditures. It’s just doubling down on something that didn’t work. Those two need to be dismantled and restructured. And the authority and the funding, in some way work it out with the municipalities, and let them have their own charge versus having the state pick winners and losers, which hasn’t change a thing.

Voters in Campbell County voted down a quarter-percent sales tax to support education and economic development. Across the state there’s a general wariness of taxes. Where do you stand on the issue of raising state revenue through taxes?

I don’t think it’s necessary, and I’ll tell you why. There’s a lot of fiscal responsibility that will save us money. I think we’ll see a slight rise in our energy sector, so we’ll see some revenues as far as that goes.

If we had 8,500 people leave this state in the last year-and-a-half, is raising taxes going to bring them back? I don’t think so. We just had the U.S. government provide a tax cut all the way across the country, and our economy outside of Wyoming is booming by all accounts, due to a tax cut not a tax increase.

I think there’s a lot of things we can do before we go down that road.

C17: Why would a Dahlin Governorship be good for Campbell County? What do you offer the voters of this area?

My experience in coal, my experience in transportation, logistics—all those things add to the same base that Campbell County has. If anything we can commiserate together if we have to, and I think we can improve.

And just to open the door and allow them to have charge of diversification in the county that they can control that better in their own areas. And also thinking differently on some of the ideas I brought up.

C17: Anything else you’d like voters to know about your campaign and vision for Wyoming?

My vision is the same as everyone else’s vision. All of us should have the same vision. None of us running for office can accomplish this ourselves. We all need to work together as the people of Wyoming. If we work together, there’s nothing we can’t accomplish. We can accomplish anything we put our minds to if we change our thinking.

I’m the only one that’s going to offer you specifics. It’s important to note, in general, if somebody is going to talk about fight, fight, fight, I like to know exactly what they’re fighting for and how they think it’s going to make a big difference—and if they can really accomplish it.

I’m a proactive person. I’ll fight if I have to. But I’ll tell you this. You need to research every candidate. You need to look at their history of what they say. If they say they’ve been a lifelong conservative and they might have belonged to the Sierra Club, that doesn’t square with me.

If they say they’re pro-coal and they’re working for a company that won’t use coal-fired energy, that tells you something. That doesn’t square.

I appreciate your consideration. You can start July 6 with a write-in, and ‘D-Day’ is August 21.