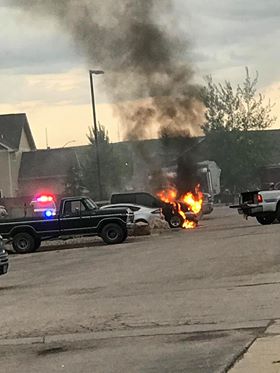 (Gillette, Wyo.) Emergency personnel responded to the parking lot of the South Fork Apartments after receiving a report of a vehicle on fire.

Police Lt. Chuck Deaton said this morning that officers were the first on scene and found a 2000 Ford pickup engulfed in flame. Officers attempted to control the fire with their fire extinguishers, however, they were unsuccessful. When the Campbell County Fire Department arrived moments later, they were able to extinguish the fire.

Division Chief J.R. Fox said that the fire was under control within minutes of their arrival.

The owner of the vehicle, a 50-year-old male, informed officers that he had just driven the truck to the parking lot from Sheridan and that there were not any mechanical issues with the vehicle.

The official cause of the fire has yet to be determined through an ongoing investigation. However, Fox said that it appeared as if the fire was caused by a mechanical issue.

Vehicle fires can be caused by an array of things, ranging from battery malfunctions to issues with the fuel line.

The vehicles on either side of the truck, a motorcycle and a passenger car, were not damaged in the blaze. The truck itself, however, was reported as a total loss.