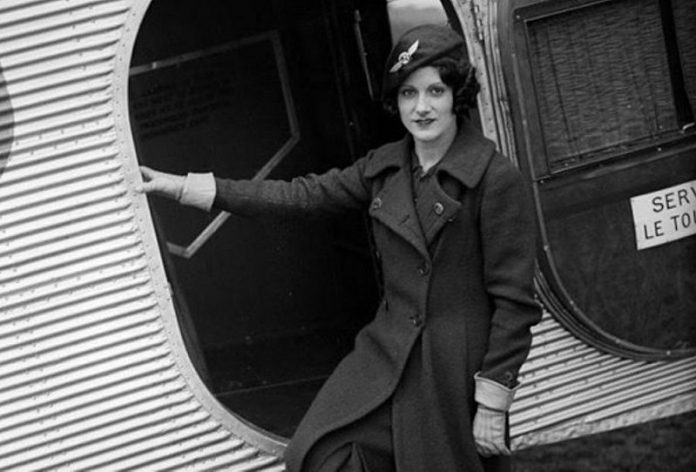 (Gillette, Wyo.) On May 15, 1930, a Boeing 80A making a commercial flight from San Francisco to Chicago made a stop in Cheyenne, one of 13 it would make before landing in Chicago 20 hours after it departed the Oakland airport.

What makes this flight historic was a woman on board named Ellen Church. She wasn’t a passenger. She was the first female flight attendant. While commercial flights had stewards on board for about a decade, it was considered, like all jobs in the airlines, to be a man’s job. And in those days, you could be pretty blunt about such attitudes.

Church loved flying so much, she became a certified pilot with the hopes of flying for an airline. When she applied for a pilot’s position with Boeing Air Transport, which eventually became United Airlines, the airline’s executives weren’t too keen on the idea of women operating aircraft. What if there’s an emergency and she started crying rather than dealing with the problem?

These were actual concerns people had back then, and fortunately we got over that nonsense. In those days, however, a woman flying a commercial flight with a dozen passengers would be like proposing a self-flying plane today. So, Church was turned down.

Church proposed another idea that the executives did like. She suggested that flights had on-board nurses, which would help placate a public that was still a bit wary about traveling on these new fandangle flying contraptions.

Air travel was quite a bit different back then. The Boeing 80A had a maximum altitude of about 14,000 feet, and flew at about 125 mph. Its range was just 460 miles. This meant that it flew right into the weather commercial jets today mostly avoid except on departure and arrival. Not only did flights cruise through the bulk of weather along the route, accurate weather reports were few and far between.

This meant a very slow, bumpy, sometimes terrifying flight. Handing out air sickness bags was routine, and sometimes you had to take a pulse.

Having a nurse on board might sell more tickets, the airline executives agreed. However, they kind of spruced up Church’s idea a bit. True to the thinking of the day, they decided, in addition to being registered nurses, these stewardesses would also be attractive, appealing to their target demographic of air traveler, which was primarily men.

On top of their nursing credentials, the “sky girls” would not be married, under 25 years old, no taller than 5-feet-4, and weigh no more than 115 pounds. Could you imagine that help wanted ad today?

As part of a three-month experiment, Boeing Air Transport hired on eight stewardesses, including Church. Besides giving passengers a suitable container to throw up in, they also had to haul luggage, help fuel the plane, push it inside the hanger, wash dishes, keep passengers safe, and be really hot while doing it, at a time harassment lawsuits were unheard of.

These comely flight attendants were such a hit, they became standard in airlines for years, even today. Of course, today the weight, age, and marital status requirements wouldn’t fly with the public, so the airlines have done away with those. Otherwise, Hooters would probably offer air service today.

Church would perform her stewardess job for 18 months before an automobile injury grounded her.

She would go on to serve in the army as a captain in the Army Nurses Corps during World War II, helping to evacuate by air wounded soldiers from Africa and Italy. She also trained evacuation nurses for the D-Day invasion of France. She received the Air Medal, the Victor Medal, the American Theater Campaign Medal, the European-African-Middle Eastern Campaign Medal, and seven bronze service stars. She would have made a great pilot if Boeing Air Transport would have allowed it.

She returned to the states after the war, and had a nursing career in Terre Haute, Indiana. She died in 1965 as a result of injuries from a horse-riding accident.

Ellen Church Field Airport in Cresco, Iowa is named after her.