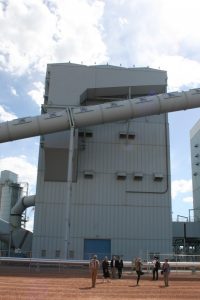 (Gillette, Wyo.) An idea that began in 2014 took another big step into reality yesterday with the dedication ceremony for the Integrated Test Center at the Dry Fork Station north of Gillette. A number of elected officials were on hand for the event, including Governor Matt Mead, who spoke to the gathered crowd of all the hard work and cooperation that has made the project possible.

“You can have that dream, you can get the money from the legislature, but it takes incredible partnerships to make it happen,” Mead told the crowd.

The ITC is a public-private partnership that will play a vital role in Carbon Capture, Utilization, and Sequestration (CCUS) technology research. It’s one of only three similar research facilities and the largest in North America where testing will occur in real world conditions.

One of the partners, Basin Electric form fitted the plant to house the test site. Each of the partners bring a different aspect of the project to the table, creating what is being referred to as an innovation ecosystem. XPRIZE developed another partnership with NRG and Cosia to facilitate the contest responsible for bringing the five international research teams to the ITC.

Marcius Extavour, senior director of NRG Cosia Carbon XPRIZE, explained his hopes for the ITC were to accelerate, innovate, and inspire.

Mead told the crowd the first time he met with XPRIZE in California they were talking about mining asteroids.

“I thought, if we can mine asteroids, we can dang sure continue mining coal,” continued Mead. “My view, my vision is we can become the energy Silicone Valley of the world right here in Gillette, Wyoming and Campbell County.”

“I think the innovation ecosystem is us. I think it’s actually the people in this tent,” explained Extavour. “It takes a community to actually move a project, move a vision like this forward. Ecosystem means all of us communicating, talking to one another and building something that’s greater than just our day jobs and what we do every day.”

The five teams that will be operating at the ITC are: Carbon Upcycling UCLA – U.S.A., Carbon Cure – Canada, Carbon Capture Machine – United Kingdom, C4X – China, and Breathe – India. The other five winners will be conducting their research at the Alberta Carbon Conversion Technology Center in Canada.

Along with the carbon XPRIZE teams, Kawasaki Heavy Industries will also be performing research on solid sorbent capture technology at the ITC. In March, a Wyoming delegation, including Gillette Mayor Louise Carter-King, visited the KHI test facility in Japan prior to announcing the firm would conduct additional project testing at the ITC.

Click here to see the County 17 story on the XPRIZE winners.