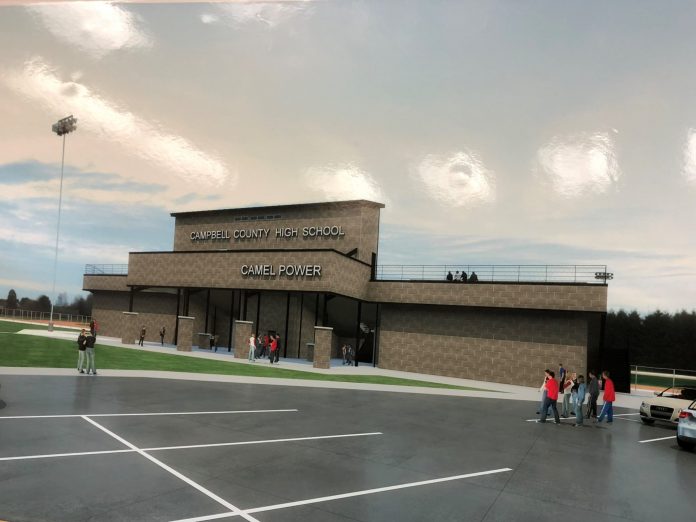 CLARIFICATION: Currently there is no summer construction scheduled at the Campbell County High School Stadium.

At Tuesday’s meeting, the Campbell County School Board only approved opening the bidding process for the possible renovation. After the deadline for bidding closes, the school board would then have to vote at a future meeting on whether or not to accept one of the bids and move forward with the proposed project.

The board also heard a report from Associate Superintendent for Instructional Support Kirby Eisenhauer on a 300 page Facility Evaluation for Campbell County High School. Now that Thunder Basin High School is up and running, the board will focus on the original high school’s aging campus.

At the direction of the board, Eisenhauer will now work to determine the most cost effective remedy for CCHS. The two options are construction of a new school or renovation of the current structure that first opened to students in 1972. Both options require funding from the School Facilities Division.

Both junior high schools will begin classes next fall with new STEM SmartLab Learning environments. Creative Learning Systems, the same company that installed STEM labs in four Campbell County Elementary Schools at the beginning of the year, will handle all the details from design and implementation to professional development and support.

The price tag for the two labs are right in line with the elementary facilities and vary due to the difference in facilities and the locations of the rooms. The contract price for Sage Valley’s STEM lab is $167,647 and for Twin Spruce’s is $178,528. A portion of those funds will come from a $220,000 grant that has already been secured by the district.

During the planning process there was some concern that half the students entering junior high will already have had a STEM lab experience and the other half won’t. Creative Learning Systems representative Josh Nelson explained that the curriculum is adaptive and will fit the bill for both types of students.

“It’s not just a rerun of the curriculum that they get in the elementary,” said Eisenhauer. “They’re going to expand and test their knowledge all the way throughout the system. So, the curriculum is very detailed and in-depth.”

Eisenhauer said both principals are excited about the opportunities. Prairiewind Technology Facilitator Heather Gibson was honored last week as Wyoming’s STEM Teacher of the Year by the Wyoming Department of Education.

Earlier this month the school board directed the administration to plan on adding up to four additional STEM Labs at the elementary level.

Now that the transition to two high schools in Campbell County is complete, the school board will focus on facility maintenance issues with CCHS, starting with the stadium. With the board’s unanimous approval, bidding on the project opened today and is expected to cost around $1 million.

“It dresses it up, it provides a nicer atmosphere and some more equity in the facilities,” Eisenhauer told the board.

Eisenhauer said the bathrooms alone at the stadium cost around $500,000 when constructed several years ago. This summer’s facelift will include gutting the press box and renovating the support buildings for the stadium.

“To me it would be a good investment,” said Eisenhauer. “I have looked at how we can set that up financially. We could use some ten percent major maintenance money, have a request to the rec board for additional funds to support that work, and in addition may have to look at some general funds as well.”

The upgrades to the CCHS Stadium would remain in place, regardless of what decision is made about the rest of the CCHS facilities.

Right now any precipitation drips through the bleachers and pools underneath because of poor drainage.

“We’ve addressed that as well,” said architect Dale Buckingham. “That will be covered and protected from that moisture. So, it should be a much more pleasant place to be for athletic events.”

The lights at the CCHS stadium were replaced last year with LED lighting that would support the addition of a fat track in the future. A fat track is designed so that soccer and football can be played on the same field.

Right now CCHS does not have a soccer field on campus. Both high school soccer teams practice and compete on the field at Thunder Basin.