(Gillette, Wyo.) Wyoming isn’t often associated with a lot of national news, much less a scandal that goes all the way to the president’s cabinet. But on April 16, 1922, a senate investigation blew the lid on a bribery and corruption scheme involving high-level officials and big oil executives that would become known at the Teapot Dome Scandal.

The scandal became associated with a place in Wyoming, but the only role anyone from Wyoming played in the scandal was exposing it. 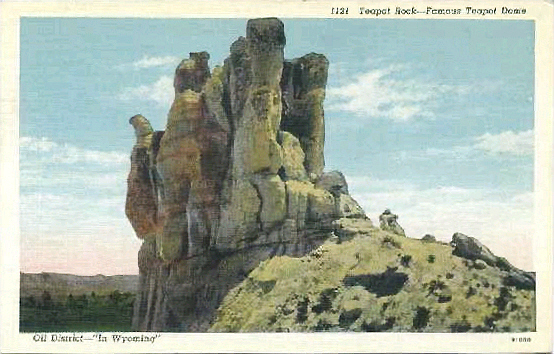 Just north of Casper is a rock formation that looked like a teapot in the 1920s, until its “spout” fell off. The formation was on top of a dome, which is a geological formation in which oil becomes trapped between layers of rock. The top layer bulges upward and forms a dome. So, this spot became known as the Teapot Dome.

About a decade before, America was trying to beef up its navy by phasing out its coal-powered fleet. Coal was a bulky fuel and the U.S. had to maintain coal fueling stations around the globe to keep its fleet running. Other nations were switching to petroleum, which granted their ships a longer range.

At the time, the country wasn’t awash in oil reserves like we are today, and concerns began to grow over what would happen if the United States ran out of oil. It was, basically, the first “peak oil” scare. If we ran out of oil, the Navy would be paralyzed.

To ensure a supply of the fuel vital to America’s Navy, Congress set aside known oil deposits on federal land to be used in a national emergency. Otherwise, these areas were not to be drilled. The two areas chosen were a couple areas in California and Teapot Dome in Wyoming. The Navy was appointed to manage these national assets.

Apparently, these locations were very rich with oil, and they made oilmen’s mouths water just thinking about them.

President Warren G. Harding appointed a friend of his, U.S. Sen. Albert Fall, to be his Secretary of the Interior. Fall argued his department was better

able to manage these oil reserves than the Navy, and he was able to convince Harding to transfer the resources to Fall’s department.

Once Fall had his hands on the oil fields, he went about making secret deals with his close buddies, Edward Doheny and Harry Sinclair, both wealthy oil tycoons. The tycoons bribed Fall for no-bid drilling leases on the federal reserves.

As an interesting side note, Upton Sinclair’s 1927 novel “Oil!” was loosely based on Doheny, and that book would be the inspiration for the 2007 film “There Will Be Blood” which featured the famous “I drink your milkshake!” scene.

Anyways, these criminals would have gotten away with their scheme were it not for some meddling Wyomingites. Wyoming Gov. Leslie Miller saw trucks with the Sinclair log hauling drilling equipment up to the Teapot Dome field. Miller told Wyoming Senator John Kendrick about what he was seeing at the dome, and Kendrick initiated a Senate investigating committee.

Coincidentally, as the scandal was about to break, Harding died. So, the president never lived to suffer the consequences of a major scandal unfolding under his watch.

The Senate investigation uncovered the corruption, and Fall was sentenced to a year in federal prison. Sadly, Sinclair and Doheny were never convicted for bribery. Sinclair did serve six-and-a-half months in prison for contempt, stemming from his decision to hire detectives to trail jury members in his bribery trial. Doheny got off scot-free.