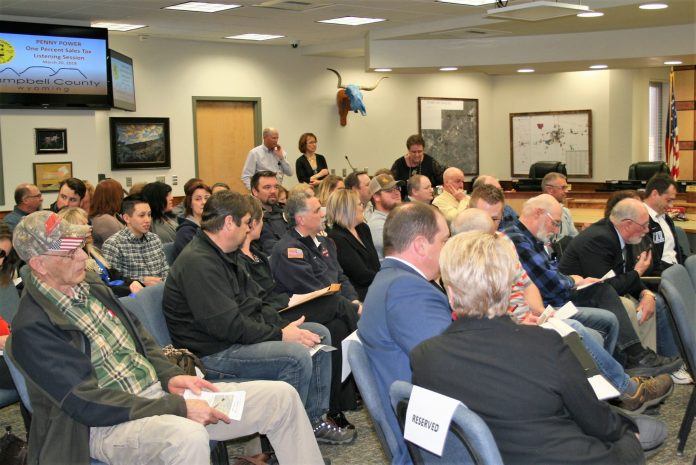 (Gillette, Wyo.) The Campbell County Commissioners hosted the third of five listening sessions today on the optional one percent sales tax that is up for renewal in November.

Administrative Director Robert Palmer began with a brief history of the headlines surrounding the issue in 1976. A picture of then Mayor Mike Enzi from that era drew chuckles from the crowd. Enzi served as Gillette Mayor from 1975 to 1982.

Out of around a hundred people that gathered at today’s listening session, 26 took the opportunity to speak on the issue. An overwhelming majority of the speakers were in favor of the optional one-percent tax itself. The issue they were split on however, was whether or not to make the tax permanent or continue to renew it every four years.

Del Shelstad told the group he’s seen a lot of changes in our community over his 52 years, and a lot of them are because of Penny Power.

“I’m a huge supporter of it,” said Shelstad. “By the same token, I spent three tours in the United States Army defending the constitution. And I think the single biggest right we have as an American is to vote on what we want to happen with our tax dollars.”

Dana Eiland spoke in favor of making the tax permanent.

“What could we be doing with our time to benefit this community [other] than sitting here talking about something we all agree on.”

Commissioner Rusty Bell, who was the first to bring up the issue of making the tax permanent, said he knows it’s a tough decision.

“I wanted to get the information out there as much as we could.  I think we have had really good communication,” said Bell. “People ask for transparency and it is one click away now, if you want to see how we’re spending that one percent money. I think that already has been a huge success.”

“I think it’s worth the work, I really do,” added Bell.