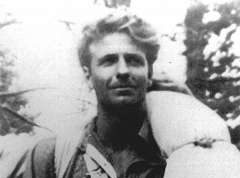 (Gillette, Wyo.) To say Earl Durand was not a man who took to game management kindly is an understatement. In 1939, laws requiring hunting licenses were fairly new. Being a mountain man who lived off the land, Durand resented the government regulating when he could and could not hunt. In March 1939, that resentment turned into a bloodbath that would leave six people dead.

Durand was born in Jan. 1913 in Rockville, Missouri. His parents would move to Powell, Wyoming just a few months later. His parents were ranchers and farmers. His childhood was pretty typical of the time. He performed all the chores any ranch kid would.

He also had a love of the outdoors. He read voraciously about wildlife, camping, and surviving in the woods. He even lived in a wall tent behind his parents’ home. He had a natural talent for hunting and trapping. Legend has it, someone could throw a baseball in the air and Durand could put four rifle bullets through it before it hit the ground.

He quit school in the eighth grade to devote himself to a life in the outdoors. He would spend weeks at a time in the mountains around Cody, Wyoming, and fought forest fires in Oregon. He also traveled on horseback to Mexico and back.

On March 13, 1939, Durand and three friends went out hunting. They killed four elk out of season west of Cody, on the road to Yellowstone. Tipped off by a resident of the area, two game wardens set up an ambush at a trail shop, where the poachers were expected to go. Sure enough, near dark, the car came down the highway.

According to newspaper accounts from the day, the two game wardens tried to halt the car by standing in front of it. The driver tried to swerve around them and escape. One of the wardens jumped on the running board and pointed his gun at the driver, telling him to stop.

Durand jumped from the car and into the darkness. Durand is believed to have shot and killed two cows, harvesting some of the meat. The rancher and another game warden were able to capture Durand shortly after and bring the poacher to justice. That’s where the story should have ended.

Durand was sentenced to six months in jail and a $100 fine. Just four days after the poaching incident, Undersheriff Noah Riley brought the prisoner his evening meal. When he opened the cell, Durand grabbed a milk bottle and hit Riley over the head. Durand took Riley hostage and forced him to drive to Durand’s parents’ home near Powell.

It was there Deputy Sheriff D.M. Baker and Town Marshall Chuck Lewis tried to apprehend the escapee. Durand shot them both. Baker died at the scene, and Lewis died later that night. In no time, a posse of 100 men were patrolling the area in search of a cop killer. Durand, who was hiding along Bitter Creek near his parents’ home, eluded the posse.

I know that I’m done for and when you kill me I suggest you have my head mounted and hang it up in the courthouse for the sake of law and order. Your beloved enemy, Earl Durand.

On Tuesday, March 21, Durand stopped at a friend’s house, where he left a letter to Park County Sheriff Frank Blackburn that read, in part, “I know that I’m done for and when you kill me I suggest you have my head mounted and hang it up in the courthouse for the sake of law and order. Your beloved enemy, Earl Durand.”

Durand was sighted the next day in an inaccessible rocky fortress on the side of a canyon. It was a fortified location and Durand warned anyone approaching that they’d be killed. Despite the warnings and the danger, two members of the posse attempted to rush the fortification. Durand shot and killed them both.

During the night, Durand was able to slip out of his fortified perch. He took the boots and deputy badge from one of the men he killed, the bodies of which no one dared try to retrieve. He then hid at a nearby ranch where the posse had made their headquarters. He stayed there all through the night, the next day, and into Thursday night.

Eventually, the posse discovered Durand had left his fortification. They assumed he fled into the hills and went looking for him there. All the while, Durand was hiding near the ranch and waiting for an opportunity to escape.

Two men in a car eventually came along, and Durand showed them the deputy badge he stole. He claimed to be one of the posse. After getting into the car, he told the men who he really was. He then directed them to a railroad depot, where he picked up 300 rounds of ammunition he’d previously ordered.

They eventually stopped for gas on the way to Durand’s parents’ home, and Durand paid the men for the cost of the gasoline, saying it was only right under the circumstances. At his parents’ home, Durand said his final goodbye to his parents. He then left the two men who owned the car behind and proceeded to rob a bank in Powell.

Despite the fact he had just stolen $3,000 and all law enforcement were off in the hills looking for him, Durand decided not to flee. Instead, he began firing into the walls, windows, and ceiling of the bank.

During the shootout that followed, another person was killed. Though, it’s unclear by whom. Durand was wounded and crawled into the bank, where he shot himself.

Durand’s tale earned him the nickname of “Tarzan of the Tetons” in the press. Why he did what he did remains a mystery to this day. What is pretty clear is this highly skilled outdoorsman, who was a loner, became very suicidal at some point during or before the poaching incident. After the bank robbery, he could have gotten away. Instead, he did everything to get himself killed and ultimately took his own life.