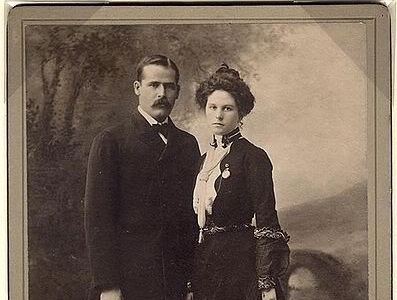 (Gillette, Wyo.) On Feb. 4, 1889, Wyoming Territorial Governor Thomas Moonlight decided to pardon a man who was incarcerated for stealing a horse, a saddle, and a gun from a ranch near Sundance. It would turn out to be a bit of a bad judgement on the governor’s part.

The young man’s name was Harry Longabaugh. He served 18 months in the Crook County Jail after pleading guilty to the charge of grand larceny. Moonlight decided to pardon Longabaugh based on the fact he was under 21 and, while incarcerated, the young Longabaugh had showed himself to be a model prisoner with an “earnest desire to reform.”

Young Longabaugh walked out of prison with his pardon and went straight for the bars, where he boasted of his time in incarceration as if it were a badge of honor. People eventually began referring to him by a nickname based on his last place of residence. They called him the “Sundance Kid.”

During the late 1890s, Longabaugh partnered up with another outlaw, Robert Leroy Parker, better known as Butch Cassidy. The pair joined up with other like-minded criminals and formed a gang known as the Wild Bunch. They engaged in a series of bank and train robberies.

One notable incident occurred in June 1899. A party of six masked men dynamited a bridge to stop a train. They then blew up the mail and express cars. They also used dynamite to blow open a safe, and proceeded to grab what they could from safe and the destroyed cars.

Just how much was stolen is lost to history, but most estimates place it at around $10,000. That would be nearly $300,000 in today’s money. Assuming an even split and a morally questionable notion that crime actually does pay, each bandit made about $50,000 that day.

Posses of lawmen, soldiers, and vigilantes crisscrossed the country looking for the Wild Bunch. The situation escalated when the gang killed a Converse County Sheriff at Dugout Creek, 10 miles north of Casper. By the middle of June, the Union Pacific Railroad and the US Marshall’s Office offered rewards of up to $3,000 per outlaw.

Nonetheless, by the following the month, the trail went cold. In August 1900, the Wild Bunch deprived a train near Tipton of $50,000 in gold, a value today of about $1.5 million.

As mentioned earlier, these bandits tended to wear masks, as they were a bit wary of being identified. Back in those days, theft was a capital crime, and the convicted were sure to swing from a noose if they were caught. So, just how much the Sundance Kid was involved in any of these crimes is uncertain.

What is for certain is the Pinkerton Detective Agency hounded Longabaugh for years and by Feb. 1901, the Sundance Kid and his girlfriend, Etta Place, headed for South America.

The circumstances of the couple’s death is a mystery. Legend has it, Longabaugh was gunned down in Bolivia in Nov. 1908.

Two masked Americans robbed a silver mine courier who was delivering payroll. The bandits were tracked to a house where a gunfight ensued. After the fight, two bodies were found inside, but Bolivian authorities were never able to positively identify the men.

While it’s believed one of the men was Longabaugh, the uncertainty has led to a lot of speculation that the Sundance Kid lived on, even returning to the United States.

Just as mysterious was the fate of his girlfriend Etta Place. Not only is little known about what became of her after she fled to South America with her outlaw boyfriend, but exactly who she was or where she came from is also uncertain.

However, in 1909, a woman asked a United States vice-consul in Chile for assistance in obtaining a death certificate for Longabaugh. No such certificate was issued and the woman was never identified. But based on the woman’s description, it’s believed she may have been Etta Place.