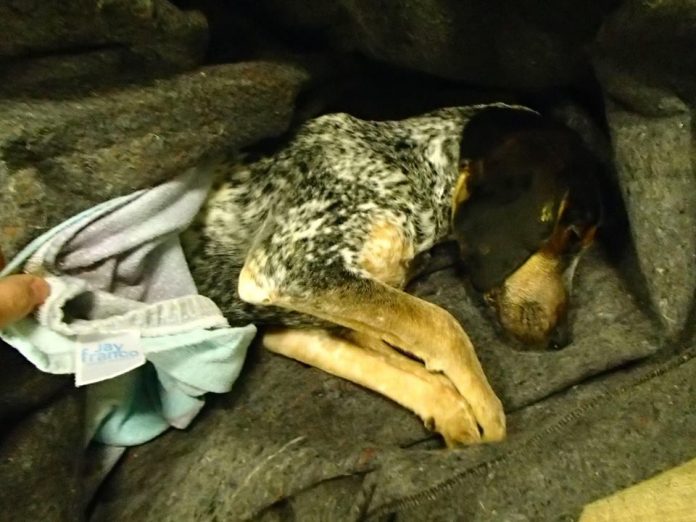 (Gillette, Wyo.) Right now, the buzz of the town is centered on Missy, the adorable hound puppy that was found wrapped in an old air mattress and left inside a dumpster on Ariel Avenue.

The latest update from the Friends of Gillette Animal Shelter’s Facebook page says that Missy has been released as of Jan 2.

According to the post, Missy is still recovering and the organization has managed to raise enough money to pay for her bill and future follow ups.

On Saturday, Dec. 30, it was reported that an unknown person had allegedly dumped a four to six month old hound mix puppy in the dumpster at 3919 Ariel Avenue between 2 a.m. and 6 a.m.

The Animal Medical Center of Wyoming wrote a post on their Facebook page that said Missy’s cries had been heard by kind citizens who saved her and immediately contacted the Gillette Police Department.

Missy was supposedly found stuffed inside a rolled up air mattress after she had reportedly been was left for dead.

The temperature during that time was estimated to be around three degrees below zero.

Missy was taken to the Animal Medical Center of Wyoming, on Lakeway, and was treated for severe hypothermia.

Not long after, the City of Gillette published a public request on their Facebook page for anyone with any knowledge Missy’s owner to report the information to the Gillette Police Department.

Evidently, it was effective.

At approximately 11 p.m. on Dec. 30, police arrested Manuel Rodrigues, 24, a resident at 3925 Ariel Avenue and charged him with felony cruelty to animals.

According to W.S. § 6-3-203, a person is charged with felony aggravated cruelty should they intend to kill, seriously injure or cause undue suffering to an animal by cruelly beating, torturing, tormenting, injures or mutilates an animal in such a way that results in death or in the required euthanasia of the animal.

Rodrigues could potentially face a fine of up to $5,000 and two years of imprisonment.

Missy, however, continued to improve according to update videos from the AMC.

“Her strength is incredible and inspiring,” one post read.

Missy’s progress was evident in a Jan. 1 post, as she was shown in a video post eating treats with her tail wagging vigorously.

“We are so lucky and blessed to have neighbors and friends like you! Our hearts are full this holiday,” AMC’s post read.

Specific details regarding the nature of Missy’s injuries could not be disclosed by the AMC or by the Friends of Gillette Animal Shelter as the investigation is currently ongoing.