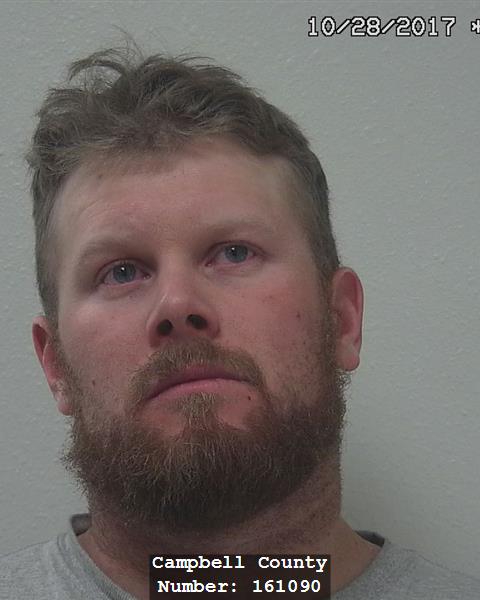 (Gillette, Wyo.) Aaron Pimm, 34, was taken into custody early Saturday morning and is being charged with two counts of felony aggravated assault after he allegedly hit his ex-wife with a vehicle and physically assaulted another male.

On Oct. 28 at approximately 1 a.m., officers with the Gillette Police Department responded to a residence after receiving a report that a woman had been struck by a vehicle and a man had been severely injured after being assaulted, both of which were, reportedly, at the hands of Pimm.

When officers arrived, they found a 33-year-old male sitting on a couch within the residence, holding a rag over his face. The affidavit of probable cause states that the male, whose clothes and face were covered in blood, had sustained severe injuries to his right eye and his nose.

Officers also contacted a 35-year-old female, the homeowner from whom the report had originated. The female complained of pain to her mouth, several loose teeth and pain to her right leg.

According to the affidavit, Pimm had arrived at the residence earlier that evening to speak to the female regarding a child shared by the two of them. During that time, the female had reportedly been thrown to the ground from a kitchen table chair by Pimm.

A witness, another female, entered the room and allegedly saw Pimm kneeling over the 35-year-old female. The witness yelled at Pimm to “get off of her and leave the home,” the affidavit states.

The female witness further informed officers that she had seen Pimm kick the 33-year-old male in the face and rib area.

The 35-year-old female attempted to break up the fight and threatened to call the police, at which point Pimm got into his vehicle, a 2014 Ford truck, and began to leave. Pimm began to pull out of the driveway, but then he reportedly accelerated forward towards the 35-year-old female, hitting and knocking her to the ground with his truck.

Moments later, the female got to her feet and began to assist the 33-year-old male with his injuries. Neither party saw Pimm leave the area prior to officer arrival.

Officers were able to locate Pimm after conducting a traffic stop on a truck that matched the suspect vehicle’s description. According to the affidavit, Pimm’s clothes were stained with blood and trace amounts of blood was observed on his hands.

Pimm reportedly refused to speak with officers regarding the incident and requested an attorney. Pimm was ultimately placed under arrest and is charged with two counts of felony aggravated assault for hitting his ex-wife with the vehicle and assaulting the 33-year-old male.