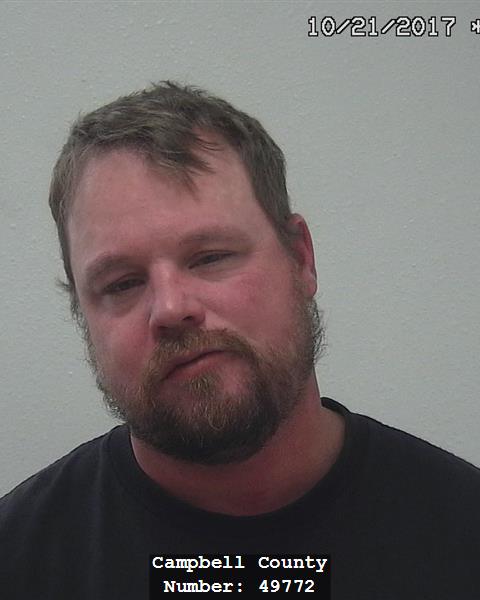 (Gillette, Wyo.) A Gillette man was taken into custody late Saturday evening after he allegedly used a blanket, shirt, and his hands to strangle his wife following an argument where he accused her of cheating.

At approximately 11 p.m. on Friday, Oct. 20, police responded to a report of possible domestic violence.

Upon arrival, officers contacted 38-year-old Dustin Harrison who, according to the affidavit of probable cause, smelled strongly of alcohol. His eyes were bloodshot and watery as Harrison reportedly informed officers that he and his wife had been arguing over an incident that had occurred weeks beforehand.

“Things got a little crazy,” Harrison said in response to officer inquiries.

Harrison’s wife was inside the residence, where she was located sitting on the stairway. The affidavit says that her voice sounded cracked, as if she had been screaming, and her eyes were bloodshot as well.

She told officers that her husband had started an argument, accusing her of cheating, and that the argument had escalated. During the argument, Harrison reportedly grabbed her face and pushed her head down into the mattress of their bed. Supposedly, it was then that Harrison used a blanket on the bed to smother his wife and attempted to wrap the blanket around her neck. He reportedly used his hands and the collar of his wife’s shirt to choke her further.

The affidavit states that Harrison’s wife was able to use an object in the bedroom to smash open a window so that she could call for help. Eventually, she was able to grab her cell phone and call her neighbors for help.

Harrison himself denied having touched his wife in any way, aside from attempting to give her a hug. He informed officers that his wife had reacted negatively to his attempted hug and screamed. Harrison was unable to provide sufficient reasons that would explain the redness around his wife’s neck or the swelling of her lip.

Harrison was placed under arrest on Saturday, Oct. 21, and initially charged with domestic battery. He was later charged with three counts of felony strangulation of a household member.