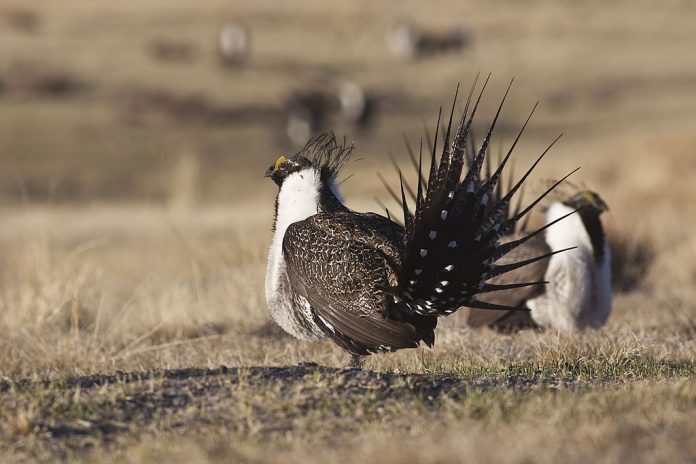 (Gillette, Wyo.) Management responsibilities for the Greater Sage-Grouse habitat have been returned to the state, following an announcement from the Bureau of Land Management to cancel the federal plan that would have threatened aspects of Wyoming mining’s future.

The Bureau of Land Management has recently announced its resolution to abandon efforts to protect sage-grouse habitat which, until Thursday, Oct. 5, would have cordoned off millions of acres across several states that are used for hard rock mining and in the process, has freed up more than 265,000 acres in Wyoming that could be used for future hard rock mining opportunities.

Wyoming Governor Matt Mead released a statement regarding the BLM’s original proposal that would have threatened future development of sage-grouse habitat. Development that carries the potential to generate millions of dollars and hundreds of jobs across the state.

“That proposal was unnecessary because Wyoming already has a system in place that protects sage-grouse while allowing for development of these minerals,” Mead stated. “I thank Secretary Zinke for cancelling the proposal.”

The proposal referenced, Secretarial Order 3353 “Greater Sage-Grouse Conservation and Cooperation with Western States, was announced earlier this year with many praising and expressing optimism regarding its future. Mead, along with Colorado Governor John Hickenlooper, was not one of them and had early misgivings for the implications such an order could bring about. In March of this year, Hickenlooper and Mead wrote a letter to U.S. Secretary of the Interior Ryan Zinke, intent on expressing their views on the issue.

“We understand that you are considering changing the Department’s approach to sage-grouse, moving from a habitat management model to one that sets population objectives for the states,” Mead and Hickenlooper wrote. “We are concerned that this is not the right decision.”

Furthermore, the governors addressed Zinke’s consideration to direct the BLM to alter the land use plans that were amended to address sage-grouse, which were originally developed by the DOI Task Force and individual sage grouse states.

“The states understand the provisions that need improvement and can help the Department develop ways to target those problematic provisions,” the letter read. “Whole sale changes to the land use plans are likely not necessary at this time.”

Secretarial Order 3353 sought to improve sage-grouse conservation and to strengthen communication and collaboration between the states and the federal government.

Effectively, the order established an internal review team, the DOI Sage-Grouse Review Team (DOI Team), which set out to evaluate federal sage-grouse plans as well as state plans and programs to ensure they were complementary. The DOI team, with job creation and economic growth in mind, also explored possible alternatives and plan modifications.

On Aug. 7, Zinke received a report from the DOI Team, prompting him to say the following:

“I’m thankful to all of the DOI team members as well as the bureau staff and the state partners who put in the hard work and time to develop this report,” Zink said on Aug. 7. “I’ve directed Deputy Secretary David Bernhardt to begin implementation of the recommendations and to direct the Bureau of Land Management, in coordination with the U.S. Fish and Wildlife Service, the U.S. Geological Survey, and other offices in the Department, to immediately follow through on the short-and long-term recommendations.”

Nearly 3 months have passed since Zinke’s announcement to begin implementation of his order and further analysis and data have shown that his earlier notions that mining had an adverse affect on Greater Sage-Grouse habitat was misplaced. Mining does not cause a significant threat to sage grouse habitat. Consequently, the BLM established that Zinke’s proposal to bar 10 million acres from future mineral mining operations was ‘unreasonable’ after the data showed that mining affected less than .1 percent of sage-grouse-occupied range.

“The proposal to withdraw 10 million acres to prevent 10,000 from potential mineral development was a complete overreach,” said Acting BLM Director Mike Nedd. “Secretary Zinke has said from the beginning that by working closely with the states, who are on the front lines and a valued partner in protecting the health of these lands, we can be successful in conserving greater sage grouse habitat without stifling economic development and job growth. And that’s what we intend to do—protect important habitat while also being a good neighbor to states and local communities.”

Following the orders cancellation, the BLM further announced its intent to receive public comments on Federal Greater Sage-Grouse management plans that affect millions of acres of sage-grouse habitat across 10 western states, 42 percent of which stretches across the plains of Wyoming.

“We’re roughly two years into having sage-grouse not listed under the Endangered Species Act. This is a good thing for the bird and energy development. As BLM looks to make changes to its federal plans, I would encourage the agency to find ways to better align with Wyoming’s state plan,” Mead said in a press release. Mead further remarked on the individuals from energy, agriculture, recreation and conservation fields that “came together to help frame the states plan to ensure a strong habitat for sage-grouse in Wyoming.”

“There are positive changes that can be made to the federal plans, but we should be careful and thoughtful about how we do that,” Mead warned. “Wyoming will be engaged in this process and will continue to work with the BLM.”

The BLM states that the lands in question will continue to be managed in accordance with existing plans, policies, programs and regulations in Idaho, Montana, Nevada, Oregon, Utah and Wyoming. These lands had been segregated, temporarily, or closed for two years to new mining claims following the original proposal for the lands to be withdrawn in 2015. As of Sept. 24, that period has now expired.