(Gillette, Wyo.) Some of them carried over 100 pounds of peanut butter strapped to their backs in a variety of backpacks as they trekked two and a half miles from their starting point at Club Energize. A total of 163 people signed up to participate in the Second Annual Peanut Butter 4K challenge hosted by Blessings in a Backpack, Club Energize, and Universal athletics last night, said Darrell Okray, general manager of Club Energize.

Combined, participants packed over 5,400 jars of Kroger peanut butter, head and shoulders above the overall goal of 5000, said Paul Utzman, director of Blessings in a Backpack.

Smiles were evident, groups of friends enthusiastically set off, some walking and some running, with their cargo. There was no rush, as the 4K wasn’t a race, but a challenge based on how much participants could carry, Okray said. 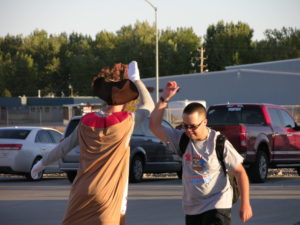 “It’s a fitness event for the community,” explained Okray. He had been instrumental to the organizing of the very first Peanut Butter 4K challenge last year, and that he had wanted to come up with an event for a good cause that was different from a typical 5K.

“Everyone has 5K’s,” Okray said. What he arrived at was the Peanut Butter 4K Challenge.

The peanut butter purchased for the challenge will be donated to children in need for nine months out the year, while school is in session, said Hillcrest Counselor Theresa Buchanan. 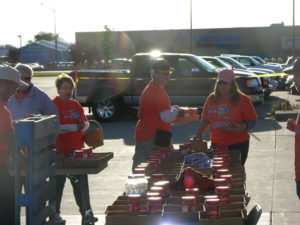 For many kids in the school system, eating only happens at school, thanks to the districts free and reduced lunch program. But when the kids go home, they don’t always get to eat because of financial difficulties and other things, Buchanan said.

Blessings in a Backpack strives to change that by helping to feed over 1000 kids. 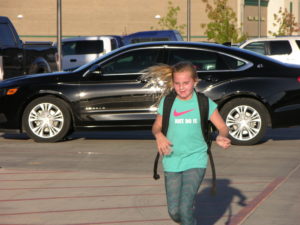 Six pallets loaded down with 7,000 jars of peanut butter purchased by the organization was purchased from Smith’s. The grocery store was more than happy to help according to Assistant Store Manager Mason O’Dowd.

“This is our part of giving back to the community,” O’Dowd said. He further mentioned that helping the community in this manner was in conjunction with the stores mission statement, feeding the human spirit.