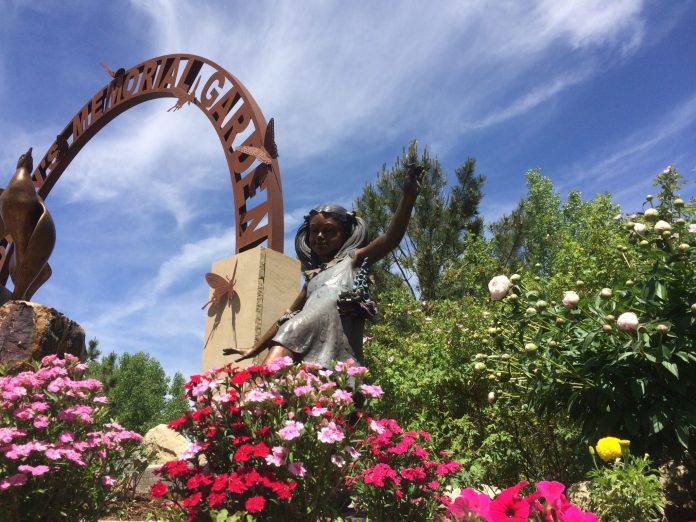 (Gillette, Wyo.) The City of Gillette hosted the 10th Annual Children’s Memorial Service which commenced on Saturday, June 10th to honor the families who have been devastated by the heart-breaking loss of a child.

The Memorial Service first began in 2007 following the tragic accident that claimed the life of 10-year-old Madison Scalzo in 2006. Little Madison’s mother, Deanna Scalzo, arranged for the statue of a flower girl, that had previously been placed elsewhere in the city, to be relocated to McManamen Park near the site of the accident. Over the years, the place has become a garden titled the “Children’s Memorial Garden”, though it is sometimes referred to as “Madison’s Garden” by the local residents. The garden is erected around the center bronze statue of a dove accompanied by butterflies flying into the sky. Around the base of the dove, there lies multitudes of bricks each bearing the name of a beloved child that was lost to the community over the years. Flowers of many different types and colors can be seen growing brightly under the afternoon sun beneath the feet of several bronze statues depicting children.

Today’s ceremony commenced with Mayor Louise Carter- King delivering an endearing speech where she expressed, “What makes Gillette great is what I see right in front of me. We always come together in good times and in bad. You are the energy that makes us the Energy Capital of the nation.” Following the Mayor were several families who shared their stories of loss and thanked the community for coming together to support them. The ceremony was concluded by a symbolic butterfly release.

The Mayor’s Art Council worked closely with the Gillette Gun Club to call for a cease fire during the time of the Ceremony. The City of Gillette’s ongoing commitment to honor its citizens, especially those who have endured tragic loss no matter the circumstance, shows that while time inevitably moves forward, Gillette will always remember.