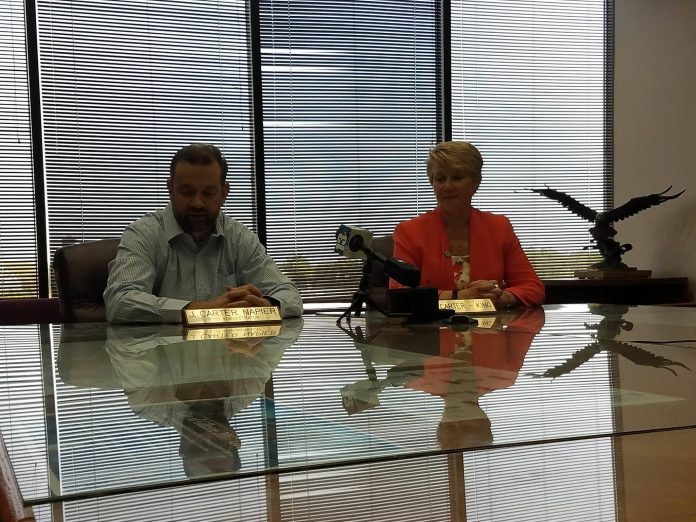 (Gillette, Wyo.) After six years of employment with the City of Gillette, Cartier Napier will be leaving the Energy Capital, to become the new City Manager in Casper. Napier put in for the same position in 2015, but ultimately decided to stay in Gillette. This time around, things are different.

“I think the timing back then was not right,” he told reporters at City Hall this morning. “I didn’t feel good about leaving the City of Gillette in the circumstances that we were at the time concerned would occur, which they did. So, I think that looking back on that it was the right decision. I certainly didn’t expect to be back in the mix as quickly, some 18 months later, but you know we don’t always have the opportunity to control the timing as it were.”

Napier will be replacing retired Casper City Manager V.H. McDonald, who had been serving the Oil City since 1999. He may be taking on some serious challenges, as Casper still faces budget problems, and a lot of upheaval with the city’s police department. Casper reporters in town today had a lot of questions about how Napier will be handling the issues when he gets there in July. He says he’ll attempt to hit the ground running.

“What I hope to do is bring some normalcy and a sense of stability and calm,” he said. “I am really interested in trying to wrap my head around the city’s finances and their financial condition generally.”

The search for Napier’s replacement will start immediately. He said today he leaves Gillette June 22, and the City will start looking for a new administrator as soon as tomorrow. He got emotional when talking about how Gillette has supported him throughout his time here.

“I certainly owe a great deal of gratitude to the City of Gillette, to the people here and the Mayor and Council and the good employees of this organization. We had a really good experience together, and I am sorry to see it end, but I am excited for the opportunities that await us there in Casper as well,” said Carter.

“It was some very challenging times that the city faced, and because of Carter we have come through those times, and we are in a very good place,” said Mayor Louise Carter-King. “We hate to see him leave, but he has left us better than when he came.”

In the interim, City Attorney Patrick Davidson will serve as administrator. Davidson himself just took over as City Attorney in December, after the retirement of Charlie Anderson. Mayor Carter-King admitted this morning that everyone at City Hall has come to rely on Napier, and will miss him tremendously.

“He has become more than just our administrator. He has really been a friend.”