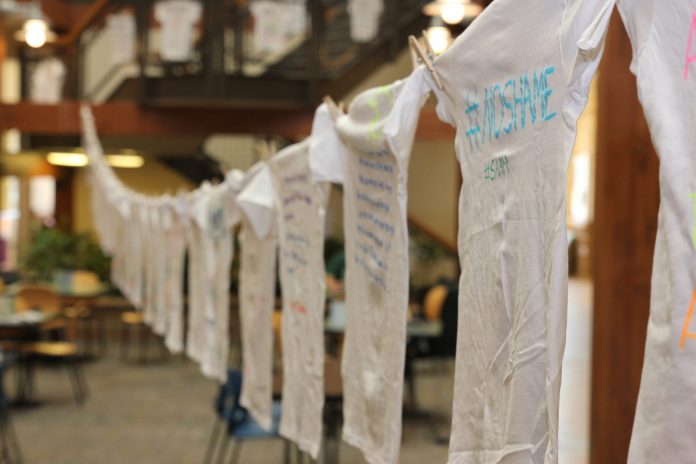 (Gillette, Wyo.) Active Minds of Gillette College this past week had their 3rd annual Clothesline Project. The project is to promote awareness for Sexual Assault Awareness Month.

“The Clothesline Project gives people the opportunity to say things that they feel might feel uncomfortable bringing up in an everyday conversation,” said Active Minds President Taylor Haining. “Sexual assault survivors get an outlet and empower each other through messages written on shirts.”

They invited everyone on campus and in the community to join by taking a stance against sexual assault. They hung t-shirts along the railings of the main campus building with messages of hope, and empowerment to other survivors. Some had messages to their aggressors. The new shirts that were made this year were placed on the clothesline and next year will be placed with the following years’ shirts.

“I like the Clothesline Project because it’s in your face and makes people talk about the problem of sexual assault, making it more empowering for survivors and also less scary knowing that they are not alone,” said Ashley Torres Vice President of Active Minds. “It’s de-stigmatizing a scary topic. It’s what Active Minds is all about.”

See all our photos from the event on our Facebook page.